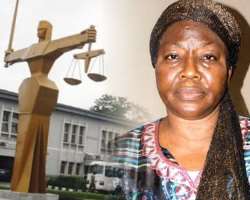 SAN FRANCISCO, June 20, (THEWILL) – Lawyers to a former deputy governor of Lagos State, Alhaja Sinatu Ojikutu, who was declared wanted by the Police in connection with a N130 million land scam, have stated that the case against her was not in any way criminal but a civil case.

Maintaining that the former deputy governor is not a criminal as she had cooperated so far with the police and the complainant on the issue, the lawyers said the police was wrong in their plan to declare her wanted, saying from the verifiable evidence at their disposal,”it is clear that our Client, Alhaja Sinatu Ojikutu ,is not a Criminal and has not committed any fraudulent act to warrant a damaging publication being made against her.”


It would be recalled that the Special Fraud Unit (SFU) of the Nigeria Police had declared Ojikutu wanted in connection with an alleged N130 million land scam.

Ojikutu and her son, Samson, according to the SFU, allegedly defrauded a land buyer of N130m, having collected money from the victim by false representation.

“The victim alleged that in September 2011, the suspects conspired and sold a parcel of land at Plot 24 Block 4 situated at Admiralty Way, Lekki Phase 1, Lagos for N130m which he paid into the first suspect’s account with the Union Bank of Nigeria Plc.

“He further stated that after payment, he requested title document and Alhaja Ojikutu procured an affidavit of support to back her fraudulent claim, a police crime extract and a publication in a newspaper all purporting to loss of the original documents of title to the land. The victim believed her because of her personality as the former Deputy Governor of Lagos State.

“The bubble burst when the victim commenced development of the land and was on the verge of completion when the bona fide owner of the land surfaced and indeed it was discovered that the land the suspect sold did not belong to her. She actually sold Plot 23 Block 4 while Plot 24 Block 4 already has a property on it,” the Commissioner of Police for the Command, Tunde Ogunsakin, said in a statement.

The Police said their investigations revealed that the land Ojikutu sold did not belong to her, but to one Mr. Afolabi. “It was also discovered that the Plot 24 Block 4, which actually belonged to Alhaja Ojikutu’s late husband, Samson Ojikutu (senior), was sold by him in 1995 and the suspect was a life witness and appended her signature to the sale of the land,” the Police said.

“The suspect, who is a 67-year-old retiree from Lagos Island, allegedly connived with her son, Samson, who is currently in the United States to commit the fraud. The suspect and her son were parties to the sale of the land and both signed the agreement given to the complainant and obtained the sum of N130m from him.

“She admitted committing the crime but confessed that it was a genuine mistake of plot identification. She refunded the sum of N50m to the complainant and promised to refund the balance as soon as she disposed of her two properties she put up for sale. She also confessed that she had invested the victim’s money in her business.

“She equally made an undertaking and payment plan which was drawn from September, 2012 and was to terminate by November 2012, but she defaulted,” Ogunsakin said.

The Police said Ojikutu had breached the terms of the repayment and had jumped bail even as all attempts to reach her had proved abortive.

“The SFU declares Alhaja Ojikutu wanted. Anybody with useful information regarding her whereabouts should report to the Commissioner of Police, Special Fraud Unit, 13 Milverton Road, Ikoyi,” Ogunsakin said.


“Our clients’ brief is that, further to a contract of sale executed between them and one Mr. Cajetan Okekearu (“the Complainant”) in respect of Plot 24 Block 4, Lekki Residential Scheme, Phase 1, said Mr Cajetan Okekearu laid a complaint of obtaining by false pretences against them at your Police Station.


“Our Client also informed us that despite making a statement essentially detailing the facts in 6 i. – xviii. below to them, said Police Officers of the Special Fraud Unit of the Nigeria Police have continued to contact Alhaja Sinatu Aderoju Ojikutu about monies alleged to be due from our clients to Mr. Cajetan Okekearu.


“Our Client, Alhaja Ojikutu, has also made herself available to the Special Fraud Unit of the Nigeria police anytime her attention was required on the matter. That is why it has come as a surprise to us that the Police are planning to make a publication declaring our Client wanted.


“In view of the foregoing events, our clients have instructed us to state the facts of the case to the general members of the public as follows:


“ Sometime in 1984 Alhaja Sinatu Aderoju Ojikutu and her late husband, Mr Sampson Adebisi Ojikutu (“said late husband”) contributed money towards the application for and acquisition of a plot of land in the Lekki Residential Scheme, Phase 1 on which property they intended to build a new matrimonial home.


“ That Sampson Adebisi Ojikutu died intestate in the United States of America on the 29th of August, 2008, leaving Alhaja Sinatu Aderoju Ojikutu, his wife and joint owner of the said land, as the survivor to the title thereof. Enclosed herewith is the death Certificate issued in the United States of America following our Client’s late husband’s death.


“ That sometime in 2010 the Probate Registry of the Lagos State High Court granted a Letter of Administration (without a will) in respect of the estate of the late Mr. Sampson Adebisi Ojikutu with reference no PHC/2114/2010 pursuant to which my aforesaid son and me are the administrators of my aforesaid late husband’s estate which includes the said land.


“ That it was on the authority of the aforesaid Letter of Administration issued by the Lagos State High Court that our clients dealt with Mr. Cajetan Okekearu in respect of the land known and described as PLOT 24 BLOCK 4 LEKKI RESIDENTIAL SCHEME PHASE 1, measuring 1379.50 SQUARE METERS, the same land in respect of which the Governor of Lagos State granted a Certificate-of-Occupancy in favour of Alhaja Sinatu Ojikutu’s said late husband and in respect of which the High of Lagos State granted the aforesaid Letter of Administration to our clients.


“That at all times when our clients dealt with Mr. Cajetan Okekearu the only land in contemplation between the parties was the land mentioned above which at all material times our clients knew for a fact, believed and still believe that they (our clients) are beneficially entitled to. The Contract of Sale executed between our clients and said Mr. Cajetan Okekearu shows the land in contemplation as Block 4 Plot 24, Lekki Peninsula Residential Scheme. The receipt dated 6th October, 2011 also shows that our client only received money from Mr. Cajetan Okekearu in respect of the said land further to the aforesaid contract of sale and in their capacity as administrators of the estate of Sampson Adebisi Ojikutu which estate includes the said land.


“Further to our clients’ discovery of the facts in paragraph xiii above Alhaja Sinatu Aderoju Ojikutu volunteered to refund Mr Cajetan Okekearu the sum of =N=130,000,000.00 (One Hundred and Thirty Million naira) which agreement was evidenced in a ‘Terms of Settlement’ dated 25th July, 2013 executed in for our clients by Alhaja Sinatu Aderoju Ojikutu.


“The alleged Bond instrument upon which the Mr. Cajetan Okekearu alleges that Alhaja Sinatu Aderoju Ojikutu and her husband sold or charged the said land in favour of one Mr. Phillips Abumere before agreeing to sell the said land to Mr Cajetan Okekearu is a forgery because Alhaja Sinatu Aderoju Ojikutu never signed any such document as a witnesses or in any capacity and do not know and have never at any time dealt with any Mr. Phillips Abumere in respect of anything.


“Acting promptly upon her voluntary undertaking, Alhaja Sinatu Aderoju Ojikutu has refunded the sum of =N=50,000000.00 (Fifty-Five Million Naira Only) out of the =N=130,000000.00 (‘Contract Sum’) she received from Mr. Cajetan Okekearu pursuant to the aforesaid contract of sale of the said land.


“At the time they dealt with Mr. Cajetan Okekearu in respect of the said land our clients did not know that third-parties had trespassed onto the said land, dealing fraudulently thereto. Alhaja Sinatu Aderoju Ojikutu has since challenged the trespassers reporting the matter to the Lagos State Lands Registry.


“Continuing their belief in their right to deal in the property known and described as Block 4 Plot 24 Lekki Residential Scheme Phase 1, as recently as 18th October, 2011 our clients paid the sum =N=4,805,620.00 (Four Million And Thousand and Twenty Naira) to the Lagos Statement in respect of said land. A letter of the Government of Lagos State confirming the payment was enclosed issued.

“ Paragraph xix and the letter mentioned there are confirms a recent act of the Lagos State Government confirming that our clients are beneficially entitled to Block 4 Plot 24 Lekki Residential Scheme Phase 1, the land in respect of which our said clients received the money subject matter of Mr Cajetan Okekearu’s aforesaid complaint.


“In view of the easily verifiable facts above, we hope that all concerned will appreciate that the dispute between Mr Cajetan Okekearu and our clients is entirely civil and has no criminal dimensions whatsoever. It is therefore not something the Nigeria Police Force or anyone else is empowered to interfere with.

“From the foregoing, it is clear that our Client, Alhaja Sinatu Ojikutu is not a Criminal and has not committed any fraudulent act to warrant a damaging publication being made against her."