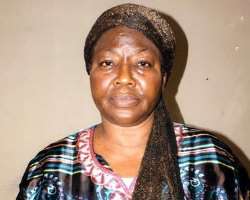 Ojikutu and her son, Samson, according to the SFU, allegedly defrauded a land buyer of N130m, having collected money from the victim by false representation.

“The victim alleged that in September 2011, the suspects conspired and sold a parcel of land at Plot 24 Block 4 situated at Admiralty Way, Lekki Phase 1, Lagos for N130m which he paid into the first suspect’s account with the Union Bank of Nigeria Plc.

“He further stated that after payment, he requested title document and Alhaja Ojikutu procured an affidavit of support to back her fraudulent claim, a police crime extract and a publication in a newspaper all purporting to loss of the original documents of title to the land. The victim believed her because of her personality as the former Deputy Governor of Lagos State.

“The bubble burst when the victim commenced development of the land and was on the verge of completion when the bona fide owner of the land surfaced and indeed it was discovered that the land the suspect sold did not belong to her. She actually sold Plot 23 Block 4 while Plot 24 Block 4 already has a property on it,” the Commissioner of Police for the Command, Tunde Ogunsakin, said in a statement.

The Police said their investigations revealed that the land Ojikutu sold did not belong to her, but to one Mr. Afolabi. “It was also discovered that the Plot 24 Block 4, which actually belonged to Alhaja Ojikutu’s late husband, Samson Ojikutu (senior), was sold by him in 1995 and the suspect was a life witness and appended her signature to the sale of the land,” the Police said.

“The suspect, who is a 67-year-old retiree from Lagos Island, allegedly connived with her son, Samson, who is currently in the United States to commit the fraud. The suspect and her son were parties to the sale of the land and both signed the agreement given to the complainant and obtained the sum of N130m from him.

“She admitted committing the crime but confessed that it was a genuine mistake of plot identification. She refunded the sum of N50m to the complainant and promised to refund the balance as soon as she disposed of her two properties she put up for sale. She also confessed that she had invested the victim’s money in her business.

“She equally made an undertaking and payment plan which was drawn from September, 2012 and was to terminate by November 2012, but she defaulted,” Ogunsakin said.

The Police said Ojikutu had breached the terms of the repayment and had jumped bail even as all attempts to reach her had proved abortive.

“The SFU declares Alhaja Ojikutu wanted. Anybody with useful information regarding her whereabouts should report to the Commissioner of Police, Special Fraud Unit, 13 Milverton Road, Ikoyi,” Ogunsakin said.