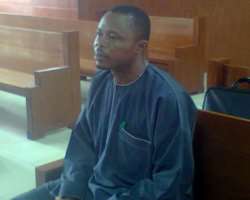 The charge reads; “That you Ignatius Okey Chukwu being managing director of Global Network Integrated Limited on or about the 21st day of August, 2009 at Port Harcourt, Rivers State within the jurisdiction of this Honourable Court did fraudulently issue an Intercontinental Bank (now Access Bank ) Cheque no. 00000101 dated 21st August 2009 in the sum of Five Million Naira (N5,000,000.00) only in favour of RIVIGO (JV) Nigeria Limited in the name of your company Global Network Integrated Limited, which the said cheque was presented for payment within three months of issue, it was dishonoured due to insufficient funds standing to your credit and thereby committed an offence contrary to Section 1 (1) (a) and (b) (I) and (ii) of the Dishonoured Cheques (Offences) Act Cap DII of the Revised Edition (Laws of the Federation) 2007”.


He pleaded not guilty to the charge.
.

The accused allegedly issued the cheque as refund of the contract fee he collected from the complainant to execute a road and bridge construction work for the Rivers state Government. The complainant was awarded the contract by the Rivers state Government in 2008 but sub- contracted it to Chukwu for which he was paid N5m vide an Intercontinental bank cheque No. 01445 dated the 5th May, 2009.

However, the accused failed to execute the contract but offered to refund the mobilisation after all effort to get him to mobilise to site failed.

Justice however Ahiakwo granted the accused bail in the sum of N6, 000,000 (Six Million Naira), and one surety in like sum. The surety must own a property worth six million and must reside in Port Harcourt.