MDGs: We Won't Rest On Our Oars, Jonathan Assures 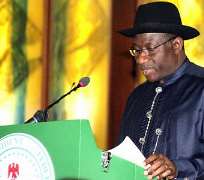 SAN FRANCISCO, June 19, (THEWILL) – President Goodluck Jonathan, Wednesday, assured that Nigeria would strive and work hard to attain the remaining Millennium Development Goals (MDGs), saying his administration would not rest on its oars after winning the first goal of the MDG - eradication of extreme poverty and hunger.

Speaking after receiving an award presented by the Food Agricultural Organisation (FAO) in recognition of his administration’s effort at reducing the number of people who are suffering from chronic hunger, Jonathan said more needed to be done to achieve the remaining five MDGs

“We are yet to reach where we want to go, but surely, we will get there. I have to thank Akinwumi (the minister of agriculture) and his team that worked tirelessly to get us to where we are. Let me use this unique opportunity to tell Nigerians and the rest of the world that we appreciate this recognition,” Jonathan said.

The Minister of Agriculture, Dr. Akinwunmi Adesina, who presented the award to Jonathan on behalf of FAO, said: “Even as we have made much progress, there are still more challenges along our way.

“The FAO of the UN have just given a special recognition to Nigeria for the achievement in reducing the number of people suffering from chronic hunger and for making notable progress in guaranteeing food security for our citizens.”

Akinwunmi also disclosed that Nigeria has added nine million metric tonnes of food to its domestic food supply, saying there is an on-going effort to start feeding school children in order to empower farmers by “buying foods from them to create market for them and also help their kids to stay in school.”

It would be recalled that the Federal Government received the achievement award from FAO in Rome last week as it joined the ranks of Algeria, Angola, Bangladesh, Benin, Brazil, Cambodia, Cameroon, Chile, Dominican Republic, Fiji, Honduras, Indonesia, Jordan, Malawi, Maldives, Niger, Panama, Togo and Uruguay, as the countries that have achieved only the MDG 1 .