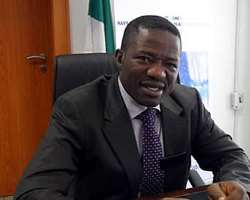 SAN FRANCISCO, June 19, (THEWILL) – An improvement in the quality of life and professionalism within the Nigeria Police has undoubtedly been the result of a well orchestrated and articulated plan and implementation of the Nigeria Police reform agenda spearheaded by Navy Captain Caleb Olubolade, the Minister for Police Affairs.


Call him a reformer, an achiever or a man with passion for perfection in anything he does, you might not be far from the best adjectives that describe Olubolade's activities and transformation efforts at the almost forgotten Police Ministry. Little wonder that he shone brilliantly today at the Ministerial Platform organised by the Ministry of Information, as he itemised in his quiet but firm style, his strides in Police Affairs.


The retired Navy Captain hit the ground running identifying four key areas of reform to revamp, re engineer and revive the already dampened morale of the rank and file of the Nigeria Police.


Under his leadership Olubolade ensured the delivery of 1,500 patrol Vans, 90 cars to enhance the response time of men of the Nigeria Police to crime and rescue calls. Thirteen Helicopters, a brand new CESSNA Citation XLS were also acquired to boost the Air Wing Section.


With the increasing menace of terrorism and kidnapping in the country, Navy Captain Olubolade brought his military background to bear when he sought and acquired an intelligence tracking system to assist the Police deal with the menace of kidnapping. The police also acquired more Armoured Patrol Vans Anti-Riot gears, Personnel Carriers, Body Protection Bullet Proof Vest and Ballistic Helmets and uniforms.


On terrorism, the Ministry of Police under Olubolade has ensured that the Police are adequately prepared and trained to deal with the menace with several officers and men trained locally and internationally to deal with terrorism situations in the country.


The Ministry has also established anti-terrorism squad in twelve different locations across the country, Counter Terrorism Strike Force Unit, Counter Terrorism Intelligence and Investigation Unit and has also participated in series of Workshops and Seminars on global strategies and tactics in combating terrorism.


Other activities carried out by Olubolade in two years that have seen his name written in gold among officers and men of the Nigeria Police includes: The construction of Divisional Police Headquarters in Owerri, Imo State and Agwu in Enugu State; the fencing of Police Stations nationwide as a result of the attacks on Police Barracks and Stations; Construction of the Mounted Troop Personnel Barracks, Offices, Stables and Furnishing at the Force Headquarters; Renovation of the Area Command, Zaria and Kafanchan amongst others.


Although, the task of reforming the police and positioning it in line with international best practice has not been easy especially coming at a time when the ministry lacked adequate and proactive template to tackle the challenges of terrorism and other vices Olubolade excelled with almost inadequate funding and has with little built a Ministry which has had a positive impact of the Nigeria Police.

His words: "The ministry believes that training is key to a professional police force and cannot be down played. Every personnel requires training... and in furtherance of this the Federal Executive Council approved the upgrade of the Police Academy, Wudil, Kano, to a degree awarding institution. The process for the admission of pioneer cadets was flagged off iin September 2012".

Olubolade further disclosed that the ministry embarked on a National Public Security Communications System project between the Chinese firm, ZTE and the Federal Government. According to him, "the thrust of the MOU is the deployment of a comprehensive, reliable, modern and robust Public Security Communication System, code named Global Open Trunking Architecture, GOTA, for national security operations".