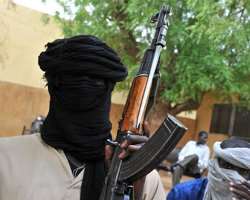 More than 32 persons were reported killed in the early hours of Tuesday when gunmen numbering about 150 attacked Kizara village in the Tsafe Local Government Area of Zamfara.

The heavily armed gunmen, who came on 38 motorcycles, invaded the village at about 4 a.m., shooting sporadically at anybody in sight.

An eye-witnesses told newsmen that the attackers set several houses and shops in the village on fire.

The witness said that the gunmen moved from house to house pretending to be residents of the village and shouting for help.

He added that when people came out, the invaders either killed them with their guns or with machetes.

The witness, who pleaded anonymity, said that the gunmen also invaded the residents of the Village Head, Alhaji Lawali Muhammad, the Chief Imam, Alhaji Usman Adamu, and his assistant, killing them.

The Commissioner of Police in Zamfara, Mr Usman Gwary, who visited the village under tight security, confirmed that 32 persons were killed while the villagers claimed that 58 persons lost their lives.

The police chief told newsmen that he had mobilised his men to search for the fleeing gunmen.

The Chairman of Tsafe Local Government Council, Alhaji Aliyu Abubakar, told NAN that the villagers had been living in fear since suspected men of the underworld sent a letter to the head of the vigilance group threatening to kill him.

Following the attack also, several residents of the village were seen fleeing the village for fear that the attackers would return to kill them.