How Attack On Okorocha’s Convoy Was Plotted 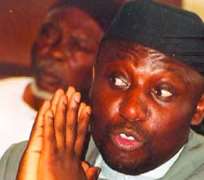 
As the dust raised by the recent attack on the convoy of Gov. Owelle Rochas Okorocha at Awa community in Oguta local government area of Imo state is yet to settle, investigation has revealed that the attack seemingly hatched to humiliate and embarrass the governor ahead of the forth-coming rescheduled Oguta state assembly seat election  is  part of the strategies mapped out by the Peoples Democratic Party (PDP) to discourage the governor from visiting Oguta before the conduct of the election.

Sources in PDP revealed that some chieftains of the party met and resorted to activate strategies aimed at whittling down the influence of Okorocha whose numerous projects in Oguta local council are building overwhelming support for the APGA candidate, Hon. Walter Uzonwanne to win the rescheduled Oguta state assembly election.

Recall that Okorocha was attacked last Saturday at Awa community while on an inspection of the ongoing 15 kilometer road project which cut across the community. The state government is also building over 20 pre-cast model schools, new general hospital, Oguta Blue Lake of Treasury and first ever Marine University in Oguta LGA.

The source further revealed that Sen. Hope Uzodinma, Eze Cletus Ilomuanya and ex-governor Ikedi Ohakim mandated the PDP candidate, Chief Eugene Dibiagwu to recruit some youths to confront Okorocha whenever sighted at Oguta for the usual road project inspection to rubbish the support his regular presences is building for the APGA candidate.

'The attack on the Gov. Okorocha’s convoy is part of our strategy to discourage him from this constant visit to Oguta. The chances of our candidate is threatened anytime he visits, and having discovered that the governor is using these projects to campaign for APGA candidate, our leaders came up with a strategy that will discourage him from further visit. We are not afraid because our leaders have the support of the presidency and even if they arrest any of those boys or Chief Eugene Dibiagwu who led the attack, nobody will sleep over in the police custody.

We will definitely prove to them that PDP owns this country” the source boasted.

The source added that the attack may not be unconnected with the recent meeting  convened by  Uzodinma in his Abuja residence with Ohakim, Ilomuanya and Sen. Ifeanyi Ararume in attendance shortly after their colossal disappointment at the last Supreme court outing. The agenda of the meeting, it was gathered, was to plan certain actions that upon implementation will destabilize the state and possibly create the needed atmosphere to actualize Okorocha's removal as governor of Imo state.

Uzodinma was said to have boasted that for as long as Okorocha remains committed to the All Progressives Congress (APC), the presidency would continue to unleash its security agencies especially the ICPC and EFCC against his administration and its key functionaries.

According to our source, the senator further boasted that the presidency would soon carry out another round of arrest of some key government officials to cripple the state government as a way of paying Okorocha in his own coin for contributing eloquently in the re-election of Rivers state governor, Chibuike Amaechi as the chairman Nigerian Governors Forum.

Meanwhile, traditional rulers in the state have raised the alarm over threat to the life of Gov. Okorocha by some disgruntled Imo sons whom he said are uncomfortable with the performance and achievements of the governor within two years in office.

Addressing newsmen in his office at Owerri, the state capital, the chairman, Imo State Council of traditional rulers, HRM Eze Samuel Agunwa Ohiri, described the attack on the governor by thugs led by Hon. Eugene Dibiagwu, the PDP candidate for the forthcoming Oguta state assembly election as condemnable and gross disrespect to the office of the governor of Imo state.

The monarch who maintained that Okorocha as a governor is at liberty to move freely to every part of the state having secured the mandate of Imo people to govern the state, warned that any harm inflicted on the governor would definitely set the state ablaze owing to the love Imo people have for him.