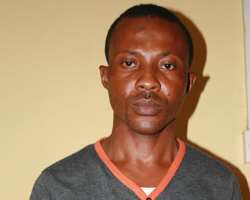 
The accused who hails from Etche local government area of Rivers State, was working as security guard with Anti Risk Security Company in Port Harcourt, Rivers State when he and three others conspired to defraud Mary Rose Ihekanacho, a visually impaired teacher, of the sum of N830, 000 under the guise of securing a job for her son with an oil company, a statement by the EFCC revealed.


One of the charges against the accused read; “That you Gift Onyegam, Sunday Promise (at large), Okon Ayebaye (at large), and Opurum Emeka (at large), sometimes in August 2012, in Enugu within the jurisdiction of the Federal High Court of Nigeria with intent to defraud obtained the sum of five hundred and forty one thousand naira from Rosemary Ihekanacho through a first bank account number 3050676816 belonging to Okon Ayebaye Susan by false pretence that the said money is meant for securing a job for her son at Shell Petroleum Development Company, which pretence you knew to be false and you thereby committed an offence contrary to Section 1, (1) (a) of Advance Fee Fraud and Other Related Offences Act 2006 and punishable under section 1(3) of the same Act”.


The accused pleaded not guilty to all charges when they were read to him.

The case has been adjourned to June 21, 2013 for ruling on the bail application, while the accused is remanded in prison custody.