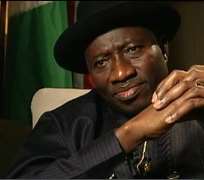 A message signed by spokesman, Reuben Abati, said Mr. Jonathan extended condolences to Mr. Tinubu, one of the president's avowed critic and leader of the opposition party, Action Congress of Nigeria.
According to the statement, the president joined the Tinubu family and other Nigerians in mourning the late matriarch, who died at 96. Madam Mogaji was once President-General of the Association of Nigerian Market Women and Men.

President Jonathan said the late women leader, and political activist, will be long remembered in Lagos and across the country for her championship of the cause of market women and men as well as for her acclaimed persistence, well into old age, in defending the interests of the poor and underprivileged in society.