A CASE IN POINT FOR US TO ECHO 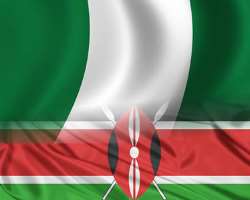 There are certain points of convergence between Nigeria and Kenya.

They are the East Africa's largest economy, ditto for us in West Africa. Only one in every four Kenyans have access to electricity just like it obtains here in Nigeria. Our poverty levels are almost on a par, with ours pegged at 46 per cent while theirs hovers between 44 and 46 per cent.

These common statistics we share with Kenya notwithstanding, Kenyatta's country seems to be more development-focused than we are.

This can be seen from the fact of the 186 countries ranked in terms of the Human Development Index(HDI), Kenya was placed at the 143 spot while we were ranked 153.

Another fact to consider is that while we as a nation was making headlines as the country with the most incidence of out of school children across the globe, kenya is well on track to achieve the Millennium Development Goal of basic education for all children by 2015.

Given these more positive outlook Kenya has over Nigeria, one expects Nigeria to be more assertive in making moves that would at least better its ratings and improve the quality of life lived in the country. Unfortunately this is not to be as the Kenyans are beating us to it!

The Kenyan lawmakers used to be among the highest paid legislators in the world. This places them in the same club with their Nigerian counterpart. But this has changed with the slashing of the Kenyan lawmakers salaries by $45000.

How?
Consequent upon a public outcry that culminated in over 100 demonstrators protesting outside the parliament building last Tuesday, the lawmakers have agreed to lower their salaries. Some of the protesters had, during the demonstration, tossed fake money at the main gate of the building to symbolise greed of the lawmakers.

Each member of the Kenyan parliament had received $120 000 as remuneration last year, but after negotiations, members of parliament agreed to accept salaries of about $75000 per annum, said the country's Salaries and Remuneration Commission.

Interestingly, this was happening about the same time Nigeria's upper legislative chamber is proposing that the Senate President and the Speaker of House of Representatives alongside their deputies should be entitled to life pensions. It is inconsequential to them that progressive countries are slashing their lawmakers salaries, their concern is in adding to their already over blotted entitlements.

Now you see the extent of our serious-mindedness. I am left wondering why it wasn't be the main gate of our National Assembly complex that experienced the tossing of some fake naira notes. For I doubt if there is anywhere else in the world one can find a better definition of greed.

It will be recalled that towards the end of 2010, the CBN governor mallam Lamido Sanusi had told us in his usual blunt manner what we suspected that 25 per cent of our annual budget is consumed by the National Assembly. Nothing serious had come out of that allegation thus confirming its veracity, at least Sanusi didn't recant.

Yet in Kenya where the laudable initiative was taken, only 12 per cent of the nation's gross domestic product was spent on government workers' salaries including the parliamentarians' pay. Still they thought it wise to free up $45000 from their recompense. Pray, when would our public officers begin to think it wise to do what is expedient considering the outrageous inequality in the land.

Maybe it is when we peacefully pay them a visit to their complex to demand their doing what lawmakers in Kenya have done. That is one of the highpoint of democracy- the right to demonstrate that is. Since the National Assembly prides itself as the beacon and pillar of democracy, let's serve them this essential recipe of civil rule.

Of a truth if the Kenyans hadn't taken their grievance to the door step of the lawmakers, I am pretty sure that that country would continue to pay its lawmakers $120 000 per annum. This is as the country's Salary Commission had earlier this year ordered a cut in parliament's pay only for the lawmakers to turn down the decision by voting to restore their salaries.

Given this scenerio, am afraid nous will never suffix in making our lawmakers do what is expected. For the human nature is such that only an external impulse can make us give up that which we cherish. I need not bore you with what these people cherish as P.J. O'Rourke averred, "giving money and power to government is like giving whiskey and car keys to teenage boys."

Our National Assembly members should, for a change, put country above their cravings for personal enrichment since it does no country any good. In the eternal words of Franklin D. Roosevelt, "we have always known that heedless self interest was bad morals, we now know that it is bad economics."

There was a time in this country when lawmakers were engaged on a part time basis with nothing more than sitting allowance as their due.

Pundits have continued to canvass that as the way to go. This disposition is given vent to by the fact that most of our lawmakers have made themselves part time legislators. Hence the vacant sits we see during plenary.

Nontheless, this shouldn't just be just for the lawmakers, members of the executive arm should also take a cue from the worthy example of the Kenyan lawmakers. If they think it a different context, let them be moved by the example of the Malawian President- Joyce Banda who gave up 30 per cent of her salary making her earn £26 000 instead of the £37 000 annual salary she was entitled to.

We should grow past the primordial belief that it is only by stockpiling money by way of fat salaries and allowances that our future and those of our families can be guarantee.

At the moment, the federal government is set to scrap 220 parastatals, agencies and commissions. Their reason for this is to streamline its activities to make for greater efficiency in service delivery and to reduce the cost of governance. But why is this cost of governance not reduced from the very top where the funds are and are persistently frittered away into private pockets by way of allowances, salaries, estacodes, security vote, constituency allowance and the likes?

It is so adverse that our public officers cannot be good spirited enough to part with a part of their colossal salaries in order to prevent the scrapping of this high number of government bodies. This is in view of the unemployment that their shedding will generate.

The truth remains that the Oliver Twist in us will always present itself no matter what we are earning at the moment. If this was not to be, there wouldn't have been a proposal pushing for life pension for our most senior national legislators.

The citizens must however be on hand to help these people whose sense of reason may have been overtaken by the bounty they get out of our commonwealth. That way we would be helping them not to be poor like the Uruguayan President Jose Mujica, reputed to be the world's poorest president, lectured: "Poor people are those who only work to try to keep an expensive lifestyle and always want more and more... If you don't have many possessions then you don't need to work all your life like a slave to sustain them."

However, since moral suasion mean nothing to these people, a mild push from we the electorate can make them do something akin to what their Kenyan counterpart have done. This is because the need Nigeria has for a slice of their earnings transcends that which Kenya has for their lawmakers' $45000.