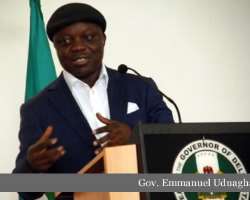 Delta State governor Dr. Emmanuel Uduaghan has charged the Federal Government on the proper management of the sovereign wealth fund to ensure effective participation of the various states in the country.

The Governor who said this Friday, at the 2nd Anniversary Public Lecture of the 5th Assembly in Asaba explained that states were not against the establishment of the sovereign wealth fund per se but the way and manner in which it was being managed.

He opined that states should be able to decide the amount to save and what to do with their savings since they are not appendages of the Federal government.

His words 'We are not against sovereign wealth fund but what we are against is the way and manner the fund is being managed'.

Governor Uduaghan called for the immediate review of the Value Added Tax Law to enable state government collect VAT in their locality and remit an agreed percentage to the Federal government.

He explained that the idea of VAT being collected and shared to states who abhor some of the VAT-able items like alcohol was unacceptable.

Emphasizing further he said 'We collect VAT on alcohol in Delta State and the money is being shared to some states in the North where alcohol is prohibited. This is not acceptable'.

Dr. Uduaghan also advocated for the practice of true Fiscal Federalism in the country to enable federating states have access to their resources for maximum development.

He stated that the practice of Fiscal Federalism would create the opportunity for states to develop their mineral and other resources and improve their revenue bases. This would engender healthy competition among the various states in the federation and enhance infrastructural development.

The governor commended the Delta State House of Assembly for their contributions to the development of the state explaining that the constant dialogue between the Legislative and Executive Arms on issues has led to the developmental strides in the state.

He therefore recommended the Delta State model of Executive and Legislative cooperation and dialogue to other state governments in order to promote peaceful co-existence and development in their states.

'Delta State House of Assembly has done well. This is because the Legislative and Executive Arms of government dialogue over issues in the interest of the state. In most issues, they agree, in others, the Legislature uses their veto power but in the end, no matter how it goes, the interest of Deltans is always considered', he stated.

Speaking further, the governor commended Deltans for the support given so far to his administration and charged politicians to be peaceful and eschew violence and acts that would heat up the polity as 2015 election activities begin.

In his Remarks, the Deputy Senate President, Senator Ike Ekweremadu called for the implementation of true Fiscal Federalism in the country stressing that it would bring about prosperity and development to the federating states.

Senator Ekweremadu stated that Fiscal Federalism would guarantee the country's growth and ensure maximum protection of the people's interest as well as provide good living standards for the masses.

He explained that a situation where states depended on the monthly Federal revenues from the mono -oil economy for their developmental activities was unacceptable as it has made most states unproductive and left other sectors of the economy underdeveloped.

His words 'A federating arrangement where the states converge at the federal capital every month to share the wealth from oil revenue generated in a few other states is not encouraging. Because of Federal allocation, other sectors of the economy like tourism lies dormant. This is not ideal'.

The Senator commended Delta state government for its 'Delta Beyond Oil' vision adding that it would help develop other sectors of the economy and reduce the over dependence on oil revenue.

He challenged other state governments to follow the Delta State lead and create ways of diversifying their revenue base rather than depending sorely on oil revenue allocation.

In a welcome address, the Speaker of the Delta State House of Assembly, Rt. Honorable Victor Ochei explained that the idea of the public lecture was to deliberate and proffer solutions on topical national issues.

He explained that there was need for the implementation of fiscal federalism in Nigeria especially on legislative issues adding that the over dependence on a mono-product economy has held states captive to the federal government.

The speaker said that Delta State Government was promoting the 'Delta Beyond Oil' initiative to help develop other sector of the economy explaining that taxation was one of the means used to achieve the initiative.

Rt. Honorable Ochei stated that the idea of Fiscal Federalism suggested that each tier of government in a federating state would be allowed to pursue its own financial policy initiative explaining that it would ensure rapid development in the country.

Honorable Emeka Ihedioha the Deputy Speaker House of Representative delivered the first lecture on 'Legislative Issues in Fiscal Federalism in Nigeria' while Alhaji Alkali Mohammed, the President of the Institute of Chartered Accountants of Nigeria (ICAN) delivered the second lecture on 'Delta State Beyond Oil: Taxation as a Catalyst for the Social-Economic Development of Delta State' .