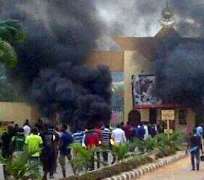 SAN FRANCISCO, June 14, (THEWILL) – The Akwa Ibom State governor, Chief Godswill Akpabio, has called for a thorough investigation of the crisis rocking the University of Uyo (UNIUYO) which claimed the lives of two students of the institution and that of five officials of the National Association of Nigerian Students (NANS).

Akpabio made the call on Friday when he paid a visit to the university to assess the level of damage and vandalisation to the property of the school by the protesting students.

He maintained that the students had taken their disagreement with the university authority too far as he condemned what he described as the targeted destruction of the school's academic records , saying that it was a pre-planned arrangement by some miscreants who hide under the guise as students of the institution.

"This act is a disaster. My observation here is that the destruction of the buildings was targeted at the over 20-year-old school records and examination results,” he said as he called on the police to carry out a thorough investigation into the case.

He also suggested the involvement of the visitor to the institution, President Goodluck Jonathan, as well as the Minister of Education in getting to the root cause of the matter.

Akpabio promised that the state government would build and hand over two hostel buildings to the university as soon as the school allocates a site for the project.

In her response, the vice chancellor disclosed that the school had set up a committee which discussed and agreed with the students on the payment of new transport fare.

She explained that the school decided to increase the transport fare from N100 to N200 from the town campus to the permanent campus after the students in the committee had brought a transporter to the school authority for approval, wondering the disagreement by the students that led to the riot.

Lamenting the incident, President of Students' Union Government (SUG) of the university, Lucky Imo Inyang, blaming the attendant destruction on hoodlums who hijacked the peaceful protest by the students against increase in the transport fare by the university authorities.

It would be recalled that what started as a peaceful protest by the students over a hike in transport fare from the institution's town campus to the permanent campus as well as the introduction of N2, 000 GST registration fees, soon turned violent .

With a demand for the sack of their Vice Chancellor, Prof. Comfort Ekpo, among other demands, the protesting students allegedly torched the vice chancellor’s office and that of the Deputy Vice Chancellor as well as a hostel block while several cars and the security post were vandalised.

The students also set ablaze the university's Examinations and Records Department where academic records, especially transcripts of students who graduated from the defunct College of Education, Uyo, defunct University of Cross River State (UNICROSS) and the present University of Uyo as well as results of Unified Matriculation Tertiary Examination (UMTE) of students were kept.