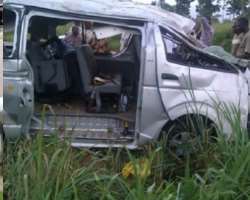 SAN FRANCISCO, June 13, (THEWILL) – The crisis rocking the University of Uyo (UNIUYO) in Akwa Ibom State has claimed the lives of the Senate President of the National Association of Nigerian Students (NANS), Donald Onukaogu, and four others.


The five NANS officials died in an auto crash which occurred at Ariam in Ikwuano Local Government Area of Abia State along the Umuahia-Ikot Ekpene highway on Thursday while on their way to Uyo, the Akwa Ibom State capital, for a meeting with the officials of the UNIUYO chapter of NANS over the crisis that led to the closure of the university and the killing of a student by the police.


The tragedy occurred when the driver of an articulated truck coming from Akwa Ibom State lost control of the vehicle and subsequently collided with the bus in which the students were traveling.


However, seven others who survived the crash with various degrees of injuries are said to be receiving treatment at the Federal Medical Centre, Umuahia, the Abia State capital, while the remains of the deceased had been deposited at the hospital’s morgue.


Confirming the accident, sources at the Federal Medical Centre disclosed that 12 persons were brought to the hospital after an accident with five confirmed dead and six in critical condition.

Abia State governor, Theodore Orji, who visited the hospital was also told that the accident victims were brought in Thursday morning as their vehicle was said to have collided with a lorry at Ikwuano on their way to Uyo.