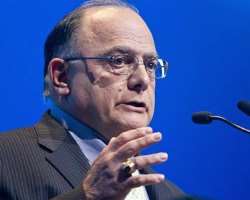 Marathon Oil Corp (MRO.N) has tapped an Exxon Mobil Corp (XOM.N) executive to become its next CEO when Clarence Cazalot retires at the end of the year.

Tillman's experience in some of the world's most complex energy fields, including Norway, Scotland and Indonesia, will help Marathon Oil as it works to expand its operations in Canada's oil sands, America's shale fields, and in Iraq and Angola.

Tillman, 51, has worked at Exxon Mobil since 1989 after earning a Ph.D. at Auburn University. A chemical engineer by training, he is a car enthusiast and once said in an interview that as a child, he dreamed of racing Formula 1 cars.

Tillman will join Marathon Oil on August 1 as president and Cazalot, 62, will stay on as executive chairman through the end of the year.

It was not immediately clear if Tillman will remain at Exxon Mobil through August. Exxon Mobil declined to comment.

In 2011, Houston-based Marathon Oil spun off its refining unit into Marathon Petroleum (MPC.N).