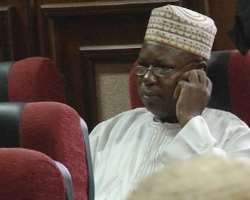 SAN FRANCISCO, June 13, (THEWILL) – The Economic and Financial Crimes Commission Thursday, re-arraigned a former staff of Pensions Account, office of the Head of the Civil Service of the Federation, Mohammed Ahmed Katun, before Justice A.R Mohammed on a one count charge bordering on obtaining money by false pretence, intent to commit fraud and diverting pension funds.

According to a statement by the EFCC, Mohammed is said to have fraudulently obtained N62, 294,917.60 (Sixty Two Million, Two Hundred and Ninety Four Thousand, Nine Hundred and Seventeen Naira, Sixty Kobo) from the pension account.

The charge reads: “That you Mohammed Ahmed Katun, at various times between 2009 and 2010 within the jurisdiction of this Honourable Court, obtained by false pretence and with intent to defraud, from the Pensions Account, Office of the Head of Service of the Federation of Nigeria, various sums in the aggregate amount of N62,294,917.60 (Sixty Two Million, Two Hundred and Ninety Four Thousand, Nine Hundred and Seventeen Naira, Sixty Kobo) and thereby committed an offence contrary to Section 1(1)(a) of the Advance Fee Fraud and other Fraud Related Offences Act, 2006 and punishable under Section 1(3) of the same Act.”


The accused pleaded not guilty to the charge when it was read to him.


Upon the plea of the accused, his counsel, Nicholas Eku, prayed the court to admit the accused to bail.

The prosecution counsel, Emmanuel Egwuagu, did not oppose the bail application, but asked the court to grant the accused bail on terms that will ensure his appearance in court.


Justice A.R Mohammed granted bail to the accused in the sum of 10 million naira and two sureties in like sum. One of the sureties must be a Federal civil servant not below grade level 10, while the other surety must have landed properties in the Federal Capital Territory, FCT or its area councils. The title documents of the property as well as the accused international passport are to be deposited with the court. The accused is also not to travel outside the country without the permission of the court.