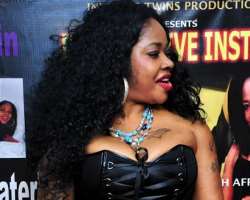 Nollywoodgists.com has been hinted that some Nigerian marketers are jostling to sell Afrocandy's controversial 'Destructive Instinct' movie in Nigeria. Though the movie has received hot criticisms in Nigeria, some say most people criticising the movie are hypocrites who will rush to buy the film if eventually released to the market in order for them to see the adult scenes in the movie.

According to information relayed to Nollywoodgists.com by a source in the industry, some marketers are giving Afrocandy the headache of choosing who will eventually win the right to sell her movie in Nigeria.

The film was premiered in America just a moment ago and as we heard, it was well attended.

It is unclear if the Nigeria's censor board will pass the film for sale in Nigeria. We were unable to speak with officials of the agency on the issue as at the time of writing this report. We promise to do that as soon as possible.