WHEN WE WERE NIGERIANS 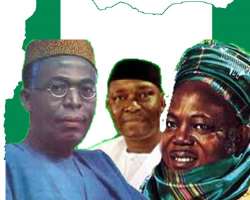 If you are wondering how Nigeria that was fighting for Independent Country became one that is fighting for disintegrated country, look no further than our “elite” schools where the shakers and spoilers in the barracks with some unscrupulous civilians took over tasks totally above their heads. Not what Herbert Macauley, Ernest Ikoli, Azikiwe, Ahmadu Bello, Awolowo, Enahoro etc. fought for. Didn’t they call Awo a doomsayer?

Unfortunately, you cannot find many in politics. Indeed many of them looked down on politicians as hustlers without tangible professions. There were exceptions of course, those were dedicated radicals determined to wrestle control of the destiny of their people from colonial masters. The fight then was Independence by any means. We had it easier than East and South African fighters hosted at University of Mandela Prison.

Those were the good old days when Nigerians were proud to be Nigerians anywhere in and outside the Country. Nigerian/African universities’ B.A.Sc. was as “good” as British and “better” than American specialties where you could get PhD in anything you want!

It was so inconvenient to be anywhere else but Nigeria, hence we heard about people flying hot eba and efo orisirisi or edikaikong to London. England was never a place to stay for long unless you flunk your examinations many times. As soon as you leave home, counting of years started, wondering when you would be back with a B.A.Sc.

The 50s were fun for those of us in primary schools, without “elite” barracks mentality. Television came to Nigeria but only nightly for two or three hours if you live in Kaduna, Enugu, Ibadan or Lagos. Other areas might be getting some reception as well. We saw Nigerian/foreign shows and great musicians were also featured like Bobby Benson and Sam Akpabot. Ogunde had always been the main show but usually at Glover Hall Lagos.

There was a great deal of fun for kids like us. We made most of our toys and played along with rules and nature. Since the gutters were clean, we made our own little boats and followed them sailing from one street to another. The implication here is that the gutters flowed with maintenance mentality. One of the reasons was that stagnant water attracted mosquitoes, so they had to be cleaned very often. We learned appropriately.

Believe it or not we had these health inspectors in major cities going into people’s houses to check if they were clean. Even in the villages where there might be no health inspectors, it was because villagers were naturally cleaner than city people. There were long brooms used to sweep the surroundings. Even the mud houses were clean in the villages. Those people on higher economic scale, cemented their houses over the mud.

So if you went out of the major cities, you would see villagers early in the morning, especially the children cleaning their surroundings before going to school. Before jumping to 80s, 90s and on, the last place I saw the old Nigeria was in the West Indies. When I saw those little kids doing their chores in Jamaica before walking to school, I saw old Nigeria even in their cities where water came out of the pipes in the markets.

Back to kids play in the fifties. We had marbles that we played with in every corner. If we were not playing marble, there were agbalumo seeds called “stations”. We would draw a circle and move back some yards. In that circle, we may bank 25, 50 or 100 in it and play with five or ten stations outside. Whoever got most in by finger flicking, would win all the stations in the circle. These were serious games, cheating got you in trouble.

This was how we learned honesty from our childhood days. If you want to know how a country improvises, check children’s gadgets. Then, we also had the cones called ikoto made from aluminum. Some of us did not like that game because if you lose, the tip of the cone would dance and sometimes penetrate your palm. It was painful but once you were in, you had to abide by the game and suffer the consequences when you lose.

We must not forget the kites. Those that had mothers with those Singer hand sowing machines did cause some damages by stealing the threads. It was another competition trying to fly higher and higher. We also had swimming clubs for those kids in Lagos at Onikan and Rowe Park. May God bless Eja Nla, Dr. Alakija that devoted his disposable time to others’ children, actually any kid.

We dominated the streets with felele soccer balls. Whenever the cars were coming we moved until another one showed up. Yeah, some of those under 30 may be wondering which city or village was that. There was so much to write about but little space left.

The topic of this article is when we were Nigerians but nowhere has Igbo, Hausa, Yoruba or Efik come up yet. All the kids were Nigerians, and the rules of honesty were strictly adhered to. Most of the schools have kids from different part of Nigeria, even in the not so big cities. Actually, kids from different parts of Africa to be precise. West Africans or South Africans were also Nigerians in those days.

Variety of food from different parts of Nigeria and Africa were the norm. Some of our parent did not allow us to eat outside. But believe me that rule was only good around the house. Once we stepped out, anything went. Where kids get so much appetite with their little bodies is not a miracle if you remember your childhood. There were some outside sellers of variety of foods. Something in their food always brought you back.

We all cook rice and garri at home but there were some delicious differences to the ones cooked on the streets. Even beans: ewa- Ghana and ewa- igbado when cooked on the streets were different to the ones cooked at home. We had mossa and abodo. If you grew up in the major cities like Lagos, there were two or three types of those two. One could be Ghana recipe, Togo or Yoruba types. There was kenki with Ghanaian flavor.

Tuwo were about two or three also and we had them with different stew or soup. Starch that was either Warri or Urhobo made, could have also come from Calabar but with okasi soup, Imo. But as kids, we could care less; all had one entry to the stomach. The point here was we were proud of our African food. Those eating European food in those days were killing themselves with bacon, sausage and potato wey nor get pawa.

Wow! Just trying to get to the sixties in our secondary school days, we have not even touched most of the primary school days in the fifties. Nigeria was the best!

To be continued.
Written By Farouk Martins Aresa