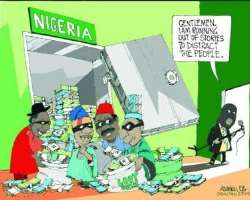 Abuja Feb 21, (THEWILL) – The Goodluck Jonathan Acting Presidency came out firing from all barrels this weekend accusing a former governor from one of the south-south states of spearheading the opposition against the Acting President's ascension to the presidency.

Though the Acting President's media adviser, Mr. Ima Niboro refused to name the former governor in his Wednesday statement, multiple sources said Ibori was not happy that Dr. Jonathan has ascended to the presidency and has decided to join forces with other persons opposed to the Acting President, to discredit his person and administration.

Mr. Niboro said in his statement last week that the anti-Jonathan group has budgeted huge amounts of funds to prosecute a negative campaign with the aim of bringing Dr. Jonathan's Acting Presidency to disrepute adding that the group has gathered several sensitive financial documents from Bayelsa from the period the Acting President was governor of the state.

"The Presidency is aware that they have set aside a huge war chest in billions of naira to bring the Jonathan Acting presidency to disrepute by any means possible," Ima Niboro said in the statement.

Attempts to reach to Chief James Ibori for comments was unsuccessful.