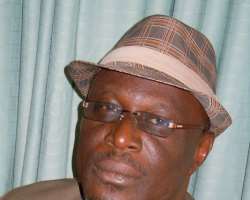 On Friday 7th June 2013, in my usual infectious characteristic manner of reading Newspapers, I stumbled over a bold headline “CONA SUES WHITE PAPER FOR N1 BILLION…….SEEN AS PART OF ABUJA PLOT” published in White Paper of Friday 7 June – Sunday 9th June 2013 edition wherein the MD/Editor-in-Chief of the paper Mr. Sam Onwuememodo informed the readers of the Newspaper of the Libel suit instituted against his Newspaper by Prof Chinedu Asinu-Anosike popularly known as CONA. According to him, the suit was necessitated by what the Plaintiff (CONA) saw as a defamation of his personality arising from a press conference of one Mr. John Paul Ochemba of Rockview Hotel Owerri which the White paper published some time ago. At first, I could not understand why Sam Onwuemeodo felt that a mere suit against his Newspaper should form a bold headline to be read by readers, or is he saying that nobody has the right to sue his paper to defend what obviously was a purely the business of his Newspaper as a result of his professional misconduct on the part of his Newspaper and himself of course as the editor-in-chief. I want to tell him that action and reaction are direct and opposite. One begets another.


Honestly, after going through the report by Sam Onwuemeodo, I could not understand the point he actually wanted to scone in that lengthy report. From the beginning to the end of the report he was writing based on speculation, gossip (as he always said somebody told him this or that) hallucination, suspicion and finally his readiness to fight naked with any perceived enemy from among the 'Abuja politicians' ultimately trying to wipe up public sentiment. I want to say with all sense of responsibility that my friend Sam Onwuemeodo left a vacuum in that his report as he did not sufficiently defend the reason why his paper has to publish a press conference of somebody against another person without verifying the authenticity and veracity of the story. What is he talking about? Or has he forgotten the cardinal principle of investigative journalism. Now, he has landed himself and the Newspaper in trouble as CONA saw the publication as defamation, fallacious, unfounded, mischievous, besmirching and out rightly damaging to his (CONA's) hard earned reputation. And he is here blaming Abuja politicians.


Ironically, this was the Sam Onwuemeodo who claimed in that his report that he rejected a material brought to him against Justice Goddy Anunihu for publication and also who refused to publish a story in a CD in 2011 that a certain Governorship candidate was the best among other candidates. Yet he was quick to publish a press conference against somebody and he would shamelessly tell us he is being guided by God. Haba! Sam Onwuemeodo. Or Is he saying that he is infallible or that he is immune to litigation? Is his style of selective journalism the best way of reporting? Abeg save us the stress man.


However, to say the least, I have been disappointed and a bit worried with Sam of recent. The way and manner he is throwing professional Conduct and ethical journalism to the wind and nose diving into writing sectional piece especially those that favour the government of the day gives one a cause to worry. Before now, I have some degree of respect for him especially in his X-ray column but frankly speaking, I do not know what has come over him of recent. I have expressed this worry to some friends. With this, Sam Onwuemeodo is gradually but systematically killing white paper as public interest for the paper has reduced maybe unknown to him. There is no balanced or objective journalism which is the hallmark of journalism in White Paper. Every report is tailored towards government Policies and programme including the views of the apostles of the government as if to say White Paper is a government owned outfit. No contrary report or view. White Paper should take a clue from other local tabloid in the State like Horn Newspaper, Announcer, Trumpeta etc.


All the sentiments, gossips and wrong impression Sam Onwuemeodo tried to create in that report to me, are all nonsensical, irresponsible and mere lamentations. Or how could one take him serious that a libel suit instituted by a man of CONA's standing and stature in the society could be blamed on imaginary Abuja Politicians. This is just a tale told by Sam full of sound and fury, signifying nothing. This is a cheap blackmail. By the way, did he not know the existence of Abuja Politicians before he went and published an unverifiable story against High Chief Anosike? Is he the only Editor of a Newspaper in Owerri? Why did he think he is so important a personality that Abuja politicians would want his head? He is in fact having a very wrong impression of. Again, does he expect everybody to keep quiet while he uses his Newspaper to impugn on people's reputation? I am surprised at this Sam Onwuemeodo making himself too important.


The case with CONA is in Court. He has the constitutional right to defend himself in court not in the pages of Newspaper. Let him shut up his mouth and save his ink. The battle is not a physical one but rather a legal one. He said he would take the battle to their door step. Hear him “I will drag everybody out and the thing will escalate so that at the end of the day, those who have eaten with some of this people would know they had made a mistake” Sam please go to court and iron out your matter. Whatever you sow, you reap. This is not time for self righteousness.


Finally, I want to say that many readers of White Papers are disappointed and disgusted with his recent handling of the medium. They know the truth, the lies and the praise singing in all he writes about the government. The earlier he adjusts the better for him. Government and power are transient. A word is enough for the wise.