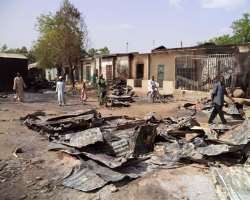 SAN FRANCISCO, June 10, (THEWILL) – A second republic governor of old Borno State, Alhaji Sheikh Jarma, has called on the Federal Government to prevent what he described as humanitarian crisis in the three North-Eastern States of Adamawa, Borno and Yobe which are currently under emergency rule.

He said the on-going crisis in the three states has brought 'catastrophic' loss of lives and property on the people of the area.

Jarma, who is also a member of the Board of Trustees of Sir Ahmadu Bello Foundation, made the call on Monday in Maiduguri, the Borno State capital, while presenting relief materials on behalf of the foundation to the residents of Bama and Baga who were recently affected by the face off between Boko Haram and the military.


"The Federal Government should do all it can to come to the aid of the millions of innocent civilians entrapped in the vortex of violence. We strongly feel that there should be adequate provision of humanitarian services to avert any humanitarian crisis," he said.

While handing over the relief materials to Governor Kashim Shettima at the Government House in Maiduguri, Jarma said the gesture was to reduce the sufferings of the victims. The items donated included 1000 bags of Semovita, 500 pieces of women wax fabrics, 500 pieces of mats and 280 pieces of mattresses, among others.

The former governor, who also pleaded with other well meaning Nigerians to come forward and assist the victims of the crisis, noted that the token relief materials would not adequately meet the need of the victims.


He however disclosed that the foundation was preparing to organise an entrepreneurship development training for 100 youths for effective skills acquisition knowledge and link them with micro-finance firms.

Jarma added that the foundation will award scholarships to 10 Borno indigenes to undergo Higher National Diploma, (HND) studies in any public institution across the country.

Expressing appreciation to the foundation for donating the items, Shettima said the relief materials would complement government efforts in tackling the plights of the victims just as he craved the indulgence of the Foundation to allow communities in Marte Local Governnent Area to benefit from the materials.