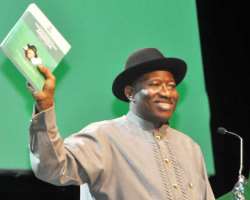 
By Nasir Ahmad El-Rufai
The mid-term review of the Goodluck Jonathan administration was celebrated with much pomp and pageantry. To an onlooker or a visitor to the country, the review of the administration's performance was right on course and almost believable. The paradox is that the same people who set the examinations, sat for them and graded themselves. Sadly, contrary to the current administration's celebration of success, the grand 'economic' figures that were reeled out mean nothing to the ordinary person. The President, proudly with the midterm review document in hand, has asked that we score him. That is what exactly will be covered by this concluding piece of mid-term assessment; not from the perspective of the government but from the angle of the perceived 'beneficiaries' of the various schemes and policies that have been enacted since 2011.

Considering the macro-economic issues which have been celebrated by the current government, the fact is several notable aspects of the economy which the government claims to have improved, only impacted a few beneficiaries. The government claims credit in a GDP growth of about 7%. It also beats its chest on the renovation of airports and the resumption of a weekly train service between Lagos and Kano, having been off the lines for nearly twenty years. The government also touts its award of several contracts for infrastructure, especially roads. Finally, the Jonathan government is very smugly proud of its so-called power sector reform and the corollary privatization of several distribution and generation companies.

In the area of providing safety and security for citizens, the government has just recently declared a state of emergency in Adamawa, Borno and Yobe States, while at the same time ratcheting up the military onslaught at the Boko Haram insurgency, particularly in those three states. Prior to these actions, the government had all but capitulated to all manners of security challenges in all parts of the country, from the kidnappings, to piracy, communal and inter-ethnic clashes, the potentially explosive grazers/farmers relationship all over the country, armed robbery, to all other strains of dissidence. And, of course, the government’s own pretense at, and overlooking serial human rights violations and repeated extra judicial killings of innocent citizens by the security forces.

In the two years since the election of President Goodluck Jonathan, poverty has reportedly declined by 2% (48% to 46%) according to the World Bank's vice president for Africa. Worthy of note is the fact that it was also mentioned by the World Bank chief that a GDP growth rate of 8% is insufficient to reduce poverty in the country. In practical terms, while there appears to be a minute improvement in the numbers, how significant is a 2% reduction in poverty when about 60% of the population is poor? What does this reduction in poverty mean to the rural dweller who cannot afford the minimum of a dollar (about 160 naira) to cater to his daily needs of feeding, transportation and other human engagements?

Beyond all the trumpets being blown by the current administration for its performance, poverty still abounds greatly in the country which by all standards and measures should not be, given Nigeria's vast natural and human resource endowments. According to the Revenue Watch Institute, Nigeria is recognized and ranked 40th among 58 natural resources-rich nations. But because these revenues are not properly accounted for and managed terribly, they benefit only a few who have access to the funds at the detriment of the citizenry.

Inequality is on the rise as attested to by Rev. Jesse Jackson who was invited for the democracy day celebrations. His analysis of the Nigerian situation, however grim, is so true.  He mentioned that there would be continuous agitations and unrests in Nigeria until the country's system was able to guarantee economic justice and equality to the people, stressing that poverty in the midst of plenty was unacceptable.

Sadly, Nigeria, as at the end of 2012 ranked as the 35th most corrupt country in the world. Ridiculously, the government attributes the marginal improvement of moving four places from its ranking of 2011 to the Federal Government's resolve to fight corruption head-on. The government also responded to the ranking by saying, 'it shows clearly that Nigeria is gradually but steadily coming out of the cycle of most corrupt countries'. At this pace, the only thing obvious is the fact that the nation is nowhere close to being taken off the corruption list.

The debt stock of the nation keeps soaring and has currently doubled what it was in 2007. According to statistics available on the Debt Management Office (DMO) website, the external debt stock as at 1999 was about $28bn; by March 2007 was $3.3bn, $5.7bn by December 2011, $6.5bn by December 2012 and $6.7bn by March 2013. What does the Nigerian government have to show for its massive external borrowing? Is it the erratic power supply or the weekly train services which service an insignificant fraction of the population? Government borrowing ought to inject needed cash into the social sector of government by funding critical priority areas such as health, basic education, water, and roads. Can we proudly say we have seen considerable improvement in these sectors?

Incidentally, barely a week after Jonathan's celebration of 'achievements', two of his ministers - Zainab Kuchi and Labaran Maku, admitted in public that 120 million Nigerians still lived in darkness. This clearly indicates that either this government is not reading from the same script, or those that authored Jonathan's brandished ‘achievements’ live in another planet. It may also be that the government has been caught up in its own web of lies, because however carefully managed a lie is, the truth will always come out in the end.

Those brandishing figures to say that unemployment in Nigeria is on the decrease probably live in another country. Unemployment in Nigeria has grown from about one in five people in 2010 to about one out of every three willing and able to work but jobless in 2013. Many youths beg to differ with these figures stating that these are more likely to represent the employment rate rather than unemployment. While You-Win and Sure-P may be conceptually steps in the right direction, they have remained meaningless slogans as it will take a lot more than them to get the teeming unemployed population off the streets. Most of the youth simply have no hope in what the future holds for them. The truth is that most of the insurgency being experienced in the country in its various forms from Boko Haram to kidnapping and Niger Delta militancy is a direct offshoot of the idleness and unemployment among restless youths.

What is clear though is that not only is President Jonathan determined that he has passed his mid-term exams with flying colors, he has also declared that he has passed the final 2015 exam too, and will promote himself to a second term whether we like it or not. His surrogate voices like Kingsley Kuku and Dokubo have already announced the results of the next presidential elections that we all hope will take place in 2014! These voices have made it clear that mayhem will be visited on the rest of Nigeria by the Ijaws if Jonathan does not contest and win the next presidential election. Jonathan has also embarked on a journey of annihilating any source of dissent within his toxic party, the opposition and the country in multiple fronts. within the PDP, he has procured the suspension of Governors Rotimi Amaechi and Magatakarda Wammako for daring to oppose his choice to lead the Nigeria Governors’ Forum (NGF).

By endorsing Jonah Jang – the pathetic and hapless loser of election of the NGF which every citizen saw on video with Rotimi Amaechi as the clear winner, Jonathan has descended to even lower moral standards. Seeing these old people going round shamelessly refuting what we all saw clearly on video, I sometimes wonder how people like Jonah Jang and Olusegun Mimiko sleep at night! Opposition leaders like General Muhammadu Buhari and Asiwaju Bola Tinubu are being constantly attacked in the media by Jonathanian surrogates while the constitutional rights of citizens are regularly violated to frustrate the merger and emergence of the All Progressives Congress (APC).

In the light of all these, it is clear that when Jonathan loses the 2014 presidential elections (not in 2015 as most people assume), he will pull a Laurent Gbagbo stunt, dig in and declare that he has not lost, with his surrogates unleashing violence on anyone perceived to be in disagreement. The next two years will be therefore a period of great challenge to Nigerians during which round-the-clock vigilance must be the watchword of all those that care for our nation and its people.

We all need to be proactive in insisting that the next elections be free, fair and credible. To ensure this, INEC must eliminate human intervention and manipulation of election results by ensuring that polling unit-level results go to a computerized collation centre via encrypted technology on INEC’s VSAT and the nationwide public telecommunications network, thus eliminating paper-based Forms EC8B to F, as well as the collation centers of electoral fraud, manipulation and corruption. The opposition political parties have already recommended that the next elections should all be held on the same day to reduce the logistic and material costs and the like, and eliminate the multiple sources of rigging and manipulation, among others.

The foregoing litany of failures and underperformance of government in social, political and economic spheres will fill more pages than this column can take. Things have never been as bad as we have it now and no gloss-paper document can mask the frustration of the people. The few people who praise the performance of this government or the direction it is headed are those who have benefitted inordinately from the skewed opportunities at the expense of the majority. Some of the major sectors of the country's economy which would make a difference now and for future generations (security, electric power, healthcare, employment and education) are being toyed with for political gains.

It is not the President's duty to 'try'. After all he made promises during his campaign which he ought to fulfill. It is his constitutional duty to protect the lives and property of the citizens and it is our right as citizens to hold our leaders accountable. Rather than engage in petty arguments and gloating over marginal improvements in figures as compared to previous administrations, this administration needs to demonstrate its plans to not only halt the slide, but leave a secure future for the next generation. Instead of taking all criticisms in bad faith, a government that genuinely has the interest of the people at heart should prove critics wrong by improving performance and being accountable to citizens.

In the end, it was a truly shameful spectacle for the president to sing and dance around with a document that does not have a basis in reality and claim achievements that few people can see or even feel. Judging the mid-term (lack of) progress of Goodluck Jonathan does not require any kind of extra-ordinary skills or gifts. Are you better off now than you were three years ago? Are you more secure than you were a few years ago? Can you pay school fees without breaking the bank? Are more people in jobs than they were a few years ago? Are Nigerians better united today than before Jonathan’s ‘election’? Do you even feed better than you did two years ago? The verdict is up to you.

On final note, we waited in vain for the much-touted document to be made available online or widely in print as promised by the Minister of National Planning. As at the time of writing this, we are yet to see the fulfillment of this Jonathanian promise. If and when the Mid-Term Report of the so-called Transformation Agenda is available we will do a point-by-point analysis.