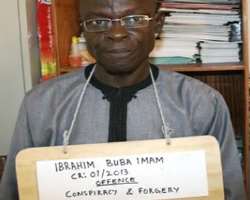 SAN FRANCISCO, June 07, (THEWILL) – The Economic and Financial Crimes Commission on Wednesday June 5,2013 arraigned one Ibrahim Buba before Justice Mohammed Garba Umar of the Federal High Court Bauchi for a case of conspiracy, forgery and obtaining by false pretences the sum of N10 million (Ten million Naira only) from one Anne Okechukwu.

The offences are contrary to and punishable under Sections 1 (1) (b) and 1 (3) of the Advanced Fee Fraud and Other Fraud related Offences Act 2006.

The accused is alleged to have collected the money from his victim in the name of Bradside Investment and Property Development, a non- existent company, as monies for title documentation, property beacon fees and Value Added Tax on a landed property at Muda Lawan market road in Bauchi, Bauchi State.

Buba pleaded not guilty to all the charges.
In view of the no guilt plea by the accused person, prosecution counsel Al qasim Ja’afar applied for a date for trial, emphasizing the readiness of his witnesses for trial. He however pleaded for a short notice for prosecution’s response to the accused person’s bail application which was served him the previous night.

Justice Mohammed Umar has fixed July 2, 2013 for hearing of the bail application and trial, while remanding the accused in prison custody.