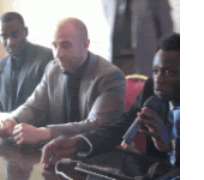 Recently, a group of Hollywood film producers stormed Ekiti State with a $40 million film project-Sole Redemption- billed to be over 90 per cent produced in the state.

The Hollywood stars had initially penciled down some states in the country as settings to be used for the shooting of the film, but the plot experienced an alteration when these four Nigerians who grew up in the United States of America and Britain got to Ekiti.

Stunned by the virgin and splendid topography of the state, Mr. Muyiwa Babatope, Oris Erhuero (actor and producer), Christopher M. Anthony (director) and Niyi Towolawi decided to use Ekiti which is repository of natural habitat required in Sole Redemption.
The state would be better off economically Anthony asserted: “Movie making brings communities together, generates local business and brings significant revenue with it. It can allow other local businesses to flourish even after production wraps.”

Anthony, who had his childhood exploits in Port Harcourt, Rivers State, explained his journey into film production:
“My inspiration came from the time I spent as a child in Nigeria, where my father lived and worked. I was inquisitive and I enjoyed exploring and I found that the more I explored, the more beauty I found.

“As an adult, I realized from seeing Nigeria in the press and on TV that there was too much focus on negative aspects and not enough on the beauty I experienced while there. I felt there was an opportunity to show Nigeria on screen in a much more balance light. Still, within the narrative of a fictional story, I wanted to showcase some of these themes but with a greater emphasis on what isn't shown. Providing a contrasting and balanced view, I wanted to show the prevailing well against the bad. As a director, I'm all about contrast. I think it provides great impact.

“I felt I could really present some of the beauty of the country that is often missed and show the best qualities of the Nigerian population. I began looking at everything from the culture and the architecture to the villages and the wildlife. The germ of an idea quickly formed. I found myself remembering feelings, sights and sounds from my own experiences there and thinking about how to convey them on screen to an average audience. I realized that there was so much potential for as adventure story with perils and resolution, emotion and excitement-the recipe for a Hollywood.

“My father introduced me to Nigeria cinema at a young age. My grandmother owned a cinema in Port Harcourt that screened Bellwood and Hollywood films. I cut my teeth early in the movie industry, with an emphasis on big Hollywood blockbusters. My research went from the creative side to the business side and I began to see the potential of the Nigerian film industry. An industry both huge and thriving but seemingly untouched by Hollywood or indeed, any other foreign film crews. I see an industry that is self-sufficient but eager to break out into the global mainstream markets.

“We could have shot in South Africa- a nation far more established for handling Hollywood films, particularly 35mm. But in doing so, we would miss out on the massive amount of positive publicity we could generate from shooting successfully in Nigeria . If we didn't do this now, another film maker would seize the opportunity soon. With my heritage, I felt if anyone was?going to do this, it would have to be me.”??

“Firstly, I felt we still aren't truly in the digital era. Most of the films in cinemas today are still being shot on film. That is not to say that there isn't a place for digital and the trend is to move in that direction. We've been shooting on film for over a hundred years and shooting digitally for only seven, beginning with George Lucas' Attack of the Clones. He had a guaranteed audience and most of it was shot in studios with large parts of almost every scene being digitally replaced or enhanced. The same is true for the recent blockbuster, Avatar. Our best film crew was making films when there wasn't even a digital camera in existence.

“I believe the look of digital still doesn't quite match film, particularly in a bright outdoor environment such as Africa . The process of capturing images is fundamentally different and even if digital gets closer, it may never match the organic photochemical reaction of celluloid. Restricting the film to a celluloid release will also help control the illegal distribution of the film, which is something of great importance.”?

“I've worked in the industry for many years, as far back as the mid 1990's. My work has mostly been in film and more recently I've stepped into broadcast. Coming from a visual effects background I've always been a part of the cutting edge technologies, most commonly as a supervising technical director. I've been responsible for directing crews to design and deliver major sequences of blockbuster Hollywood pictures including Harry Potter, James Bond, Indiana Jones and many more.

“In the last few years, I have also been working as a producer which is an interesting balance between the creative and the business side of me. Having the strong visual/directing background has made the transition to producing flow very smoothly. The director in me wants to forget the organizing and just spark emotions in audiences' world wide. I occasionally sit in cinemas and watch films I've worked on just to hear the reaction of the audience. It's comforting when the reaction is positive which thankfully it has been every time so far.”
Transition from visual effects to directing and producing

“I'm happy to say that it's been a very smooth and natural transition. I've gained so much experience over the years in the industry and worked on films with some of the great directors-the guys that inspired me as a kid-most notable Steven Spielberg and George Lucas. I've always been a part of the creative side of the business and over the years have been responsible for the entire design of a sequence right through to the cinema screen. You learn so much about what it takes to make an image look good on screen and how easy it is to get it wrong from your experiences.