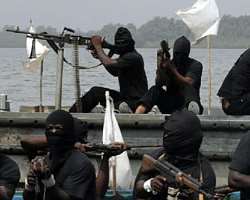 Pirates have released five Pakistani crew they kidnapped from an oil tanker off the Nigerian coast two weeks ago, security sources said on Thursday.

Increasing piracy in the Gulf of Guinea region, which includes Africa's No. 1 oil producer Nigeria and is a significant source of cocoa and metals for world markets, is jacking up costs for shipping firms operating there.

Armed pirates attacked the Nigerian-flagged MT Matrix and abducted the five Pakistani crew on May 25 about 40 nautical miles off the coast of the oil-producing Bayelsa state, a stretch of water frequently plagued by armed gangs.

The two security sources said the men, who worked for an oil servicing company, were released unharmed.

There were two attacks in the Gulf of Guinea in April in which foreigners were kidnapped and released a few weeks later. Security sources believe ransoms were paid - an increasingly lucrative business for criminal gangs who used to take more interest in simply stealing the oil on board the tankers.

On the eastern side of Africa, piracy and kidnapping that were once a scourge off the coast of Somalia have been largely brought under control by international naval patrols and the stationing of armed guards aboard merchant vessels.

International navies have not reached an agreement with nations in the Gulf of Guinea to guard ships or launch counter-piracy missions, leaving the many boats in waters around Nigeria and further west vulnerable to attack.