Rivers State: What Odili Did Not Tell Amaechi – Part I 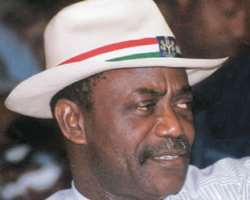 
By: Ifeanyi Izeze
When this piece was first published in November 2008, no serious interpretation was given to the issues raised. But today, five years later, this piece has been fully confirmed as will be shown in Part two of the article.

From the manner the two last governors including the interim one emerged in Rivers state, it could now rightly be said that it is a state that gets its governors strictly by divine intervention.

Peter Odili became governor of Rivers state by divine intervention after the forces of light in the churches defeated the forces of the “anti-Christ” that originally won a landslide victory in the first run of the 1999 governorship election.

Subsequently, both Omehia and Ameachi also came by divine transportation though through very different vehicles.

Truly, when Odili became governor in 1999, he came with the spirit and genuine zeal to really serve and deliver the dividends of democracy to the ordinary people of Rivers state and he was bent on achieving that.

It is on record that he was the only governor in the entire country who developed a comprehensive work programme as policy document. And the implementation of projects and programmes as set out in the master plan was carried out with utmost sincerity and frugality.

Odili’s independent power project was innovative and the first in the entire country. At the onset, the project was pursued on strict budget discipline and “utmost frugality,” though much later, it became the worst drain pipe and arena of fraud. But that’s not the issue here.

His metro rail transport service was the grassroots” delight because it was strictly targeted to help them.

In the housing sector, estates were built in all the local government headquarters in the state. Though most of the houses were cited in evil forests which made it easier for people closer to the spirit world (psycha) to occupy than normal human beings, the fact remains that at least he built and they exist till today.

Odili, early in the life of his administration preached and pursued the gospel of “utmost frugality”in the use of state funds. And because he had nothing to hide, every month, he gathered representatives from all the national, local and even foreign media. He was asked direct uncensored questions and the media interactions were transmitted live even beyond the state.

However all these changed when Odili started dancing the Ã¢â‚¬Å“na who be the mani-yiooo’regae tune towards the end of his first tenure.

He suddenly stopped dedicating Rivers state to God and metamorphosed into an “Ogbuagu (killer of lion) in the Knight of saint something”. And from the “utmost frugality “ gospel, he switched over to Ã¢â‚¬Å“in tandem with the thinking of the administration.Ã¢â‚¬ He co-opted the “anti- Christ” from the pit of hell into his work programme to execute his Total Root Out campaign (RTO).

The reckless devouring of state funds assumed a criminal dimension when the former governor became blindfolded by his inundated ambition to grab power at all cost at the centre. Rivers state stopped being his constituency and primary area of service.

Though the state’s annual budgets moved from few billions of naira to hundreds of billions, the Rivers people became more deprived in terms of service delivery. Infrastructures depreciated to laughable standard to the point school pupils sat on bare floor to receive lessons in roofless classrooms.

Matching both Odili and Amaechi’s early years in office, it seems there is a replay. And thus it has become imperative to berate Odili for not telling Amaechi certain crucial facts that could stop the son from committing the same sins of the father.

As a governor, Odili virtually lived in churches and surrounded himself with men of god and men who want to be like god as the church was instrumental to his defeating the “anti-Christ”. Throughout his stay at the Brick House, these men of god with their anointing for signs and wonders did not see a single thing wrong with the way he ran the state until the day Amaechi came into office.

Odili should have told Amaechi that the same men of god who benefited heavily from his largess singing praises and powerful prayers throughout the eight years only turned around to call for his crucifixion right from Amaechi’s first day in office.

Publicly, even in the media especially the (web-based), some people have severally referred to Amaechi as an Igbo man merely because the Ikweres can be accepted to be pure Niger Delta when it suits some people while at other times, they become more Igbo than Niger Delta.

Odili did not tell Amaechi that part of his problem in the state was because of the part of the state he was born. Some sections did not see him as a pure blood riversman. Rather they saw him as a pure Igbo man who became “riversman merely by state creation.” This was part of the fight he faced.

Odili must have laughed Amaechi to scorn when the young governor recently cried out that he was being hunted and persecuted because he refused to surrender the state’s allocations to a few indigenous cabals who want to share the fund for selfish use. The former governor did not tell Amaechi that his problem in the state started when the same people pressured him early in his administration to completely surrender state allocations for them to feast on because they were the owners of the state. Of course he “maintained” up to a point and decided to stop.

By his refusal to continue the gratification, the godfathers that brought him to office vowed to frustrate his government and remove him from power at all cost come the 2003 election. And in his desperate attempt to remain in office, the former governor opted to cultivate the middle level manpower by massively empowering younger politicians and setting them against the old brigade. The beneficiaries in turn decided to re- pay their benefactor by defending him at all cost across the state. This gave birth to the emergence of war lords across the state as counter offense to the hitherto well known forces of the godfathers.

Odili did not tell Amaechi that all the people that have been calling for his head since he left office in 2007 were the same people that form the critical mass of the gang that supposedly ripped Rivers state off its last kobo without any tangible project to show for the hundreds of billions annual budgets read year.

Governor Amaechi need to learn this bitter Odili’s lessons because over 95 percent of the people that ruined Odili’s administration in Rivers state are the same set of people currently hanging around and/or working directly in his government. They are the same group of people who are now pretending to be so embittered by the so called Odili’s maladministration in the state.

The present governor for whatever reasons should refuse to be quarantined like Odili because that was the former governor’s greatest undoing.

Odili emotionally touched millions of people when at the Abuja sitting of the Rivers Truth and Reconciliation Commission, he was asked his greatest regret in the eight years he ruled Rivers state. He said if he had the opportunity to do it again, he would not work with most of the people he had in his government for their manifested levels of deceit, incompetence and gross indiscipline displayed while holding public offices.

The lessons in the Odili’s experience for Amaechi are so glaring that if he ignores to check the irresponsibility of his aides, political appointees, associates, and friends, he may ultimate end up like Odili regretting that if he gets another chance, he would not associate with most of the people he worked with for their irresponsibility, recklessness, incompetence, deceit, and evil mindedness. Bros, shine your eye because na the same people!