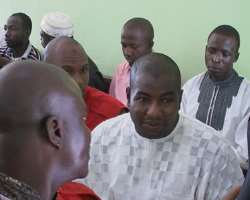 Zakari was first arraigned before Justice Ubale by the Economic and Financial Crimes Commission, EFCC, on May 10, 2011 on a 5-count charge that borders on issuance of dud cheques and obtaining under false pretence. He was alleged to have lifted 20 truck-load of cement from the Northwest Regional Office of Dangote Cement valued at N18, 360, 000 and fraudulently issued an Ecobank Cheque for the same value to Yahuza Salisu, the Assistant sales Manager of the company.

The cheque was dishonoured due to lack of sufficient credit in Zakari’s account. Similar scenario was played out by the accused when he also obtained petroleum products worth N83m from Magnut Oil and issued cheques which were equally returned unpaid for lack of credit in his account.

The charges read in parts; ‘’That you Aliyu Zakari and AZH Enterprises being the chairman, CEO of AZH Enterprises Limited sometimes in March, 2010 in Kano within the judicial division of the High Court of Justice Kano State with intent to defraud caused Magnut Oil Nigeria Limited to deliver petroleum products worth N83m (Eighty Three Million Naira Only) to you by misrepresenting yourself as owning a biscuits and clothing materials production company and thereby committed an offence contrary to section 1(1)(a) and punishable under section 1(3) of the Advance Fee Fraud and Other Fraud Related Offences Act, 2006.

“That you Aliyu Zakari being the chairman, CEO of AZH Enterprises Ltd sometimes in March, 2010 in Kano within the judicial division of the High Court of Justice Kano State with intent to defraud fraudulently obtained goods worth N18,360,000 (Eighteen Million, Three Hundred and Sixty Thousand Naira Only) form Obajana Cement Plc by falsely inducing the said company with an Ecobank cheque which you knew had no monetary value and thereby committed an offence contrary to section 1 (1) (b) and punishable under section 1 (3) of the Advance Fee Fraud and Other Fraud Related Offences Act, 2006”.

The accused, who pleaded not guilty to the charge, was granted bail by Justice Ubale. Subsequently, he jumped bail and refused to attend his trial forcing the court to strike out the matter after series of adjournments. However, nemesis caught up with him as he was arrested by the police in Lagos for another criminal infraction.