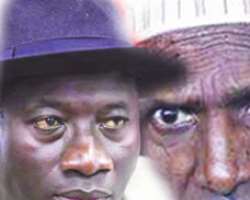 Those thinking that the political and constitutional crisis occasioned by the refusal of ailing President Umaru Yar'Adua to hand over to his deputy, Dr Goodluck Jonathan, was over had better brace up fro fresh challenges.

It is not yet Uhuru as another round of crisis is looming in the Presidency following an alleged plot by Yar'Adua's diehard loyalists to bring him back to the country at all costs.

Sunday Sun learnt authoritatively that the bemused loyalists are still smarting over the National Assembly resolution that empowered the Vice President, Dr Jonathan, to assume the position of Acting President and are bent on bringing the ailing President back even if it will be for one week.

A source privy to the plan informed Sunday Sun that the plot is for Yar'Adua to be brought to Nigeria in an air ambulance while an ambulance limousine and other life support equipment that had been imported into the country would be on standby.

He would then be made to write a letter to the National Assembly asking that power be reverted to him.

But, according to our source, because the President is still not medically fit to assume office, there is every possibility that he will break down again and the country will begin another round of handover crisis.

'The cabal is very uncomfortable with Jonathan as Acting President, so they are doing everything possible to ensure Yar'Adua returns to Nigeria. Their fear is that they will lose power completely if Jonathan is allowed to complete Yar'Adua's tenure. They want to bring Yar'Adua back to Nigeria at all costs,' said the source.

Another source said the visit of the Bauchi State Governor, Isa Yuguda, his Benue and Katsina counterparts, Gabriel Suswam and Ibrahim Shema, as well as chairman of the Peoples Democratic Party (PDP), Chief Vincent Ogbulafor, to Saudi Arabia is part of the plot to bring the ailing President back.

Even the former Attorney-General of the Federation, Chief Michael Aondoakaa, who was redeployed to the Special Duties Ministry on Wednesday in a minor cabinet reshuffle, is also said to be in Saudi Arabia on his annual leave, which is believed to be a decoy.

A source close to the Presidency however said Aondoakaa should not have been allowed to travel out of the country because of the mood of the nation and the role he played in the handover crisis.

Sunday Sun however learnt that Aondoakaa's redeployment sent jitters into members of the Yar'Adua kitchen cabinet and they now are afraid that Jonathan would sooner or later move against them.

Some politicians close to the corridors of power are also said to be unsure if Jonathan will not move against pro-Yar'Adua elements in the government.

'The demotion of Mike Aondoakaa from the exalted position of Attorney General to Special Duties on his first day in office without consulting anyone, including the party hierarchy, is a clear signal that Jonathan wants to be his own man and might be ready to rock the boat.

'Some are scared of the possibility of the man going after some ministers in Yar'Adua's kitchen cabinet like Sayyad Abba-Ruma and super-aides like Mohammed Abba-Aji and Tanimu Kurfi as well as others who treated him with scorn while he was vice president,' the sourced said.

Sunday Sun gathered that the biggest fear of the Yar'Adua loyalists is 'the possibility of the man (Jonathan) inserting certain provisions in the 1999 Constitution that might be against the interest of the North. What happens if he suddenly decides to support the call for resource control? You know he is from there (Niger Delta) and he will be seen to be doing his people a favour. He can do that on the pretence that he is trying to ensure that the restive militants don't disturb again. We heard the man is also very committed to electoral reform.'

Perhaps, the biggest fear that prompted the plot against the Jonathan government is that he might contest the 2011 presidential election.

'Yes, they were able to extract some commitment from him in that direction, but can you stop a man that has all the power he has from doing anything? After all, such commitments are not binding on anyone.

'They feel this is the time to quickly move in and circle him before he grows wings. The actions he took in the first few days in office did not inspire a lot of confidence,' the source said, adding that part of the plot is to discredit the Jonathan-led administration before Nigerians, for instance, by pinning the tag of a stooge on the Acting President.

'They will try to pin the tag of a stooge of former President Olusegun Obasanjo on him. You know not many Nigerians love Obasanjo because of his style. They feel the best way they can make him lose the acceptance of Nigerians is link him to Obasanjo,' the source further said.

Given all these permutations, there is already panic in the federal capital that the Acting President will this week appoint new Service Chiefs and a new Chief of Staff, who would also double as a de facto Vice President.

Yar'Adua's Principal Private Secretary, Mr David Edevbie, is also said to have briefed Jonathan on the outcome of his visit to Jeddah purportedly to present the 2009 Supplementary Appropriation Bill to Yar'Adua for his signature.

Edevbie was said to have confessed to Jonathan that he was not allowed to meet Yar'Adua in Jeddah.

'He (Edevbie) admitted before the Acting President that Yar'Adua's wife, Turai, and the ADC did not allow him to meet President Yar'Adua. He said he was asked to stay in his hotel where Yar'Adua's ADC and CSO (Chief Security Officer) met him to pick the budget document and later returned it to him there.

'Edevbie has been in a dilemma over the controversy that his visit to Saudi Arabia sparked off and he is desperate to clear his name. That was why he had to tell Jonathan the whole truth,' our source said.