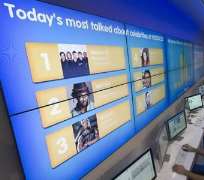 The acquisition -- the biggest ever for Salesforce.com -- is its eighth in the past year and its second big purchase focused on social media. It acquired Buddy Media, which helps big brands manage Facebook and Twitter pages, in August.

But investors took a dim view of Salesforce.com's latest purchase, pushing down its shares as much as 5 percent in early trading.

Big technology companies such as Salesforce.com and Oracle Corp are seeking growth through acquisitions as their traditional businesses slow and smaller rivals take advantage of social media.

Chief Executive Marc Benioff, who called the ExactTarget deal Salesforce.com's most important ever, said the company would now dramatically slow the pace of deal making.

"I really think what you are going to see is us taking a vacation from M&A for anywhere between probably 12 and 18 months," he said on a conference call with analysts on Tuesday.

The acquisition will reduce Salesforce.com's operating cash flow by $75 million to $80 million in fiscal 2014. The company said it now expected fiscal 2014 cash growth in the low teens compared with its prior estimate of a low 20 percent range.

PREMIUM OF 53 PCT
The offer price of $33.75 per share for ExactTarget represents a 53 percent premium to the stock's closing on Monday on the New York Stock Exchange.

The offer is 6.6 times ExactTarget's expected revenue for 2013, according to Thomson Reuters I/B/E/S.

ExactTarget shares, which prior to Tuesday's offer had risen 16 percent since they listed on the New York Stock Exchange in March 2012, rose 53 percent in early trading to $33.73 on Tuesday.

Salesforce.com said its revenue for fiscal year ending January 2014 would increase by $120 million to $125 million as a result of the ExactTarget acquisition, which is expected to close in the quarter ending July 31.

The acquisition is expected to reduce fiscal 2014 earnings by about 16 cents per share, Salesforce.com said.

Salesforce.com, which had about $3.1 billion in cash and marketable securities at the end of the first quarter, said it would finance the transaction through cash on hand and a term loan.

Salesforce.com shares were down 3 percent at $39.77 just after the opening.