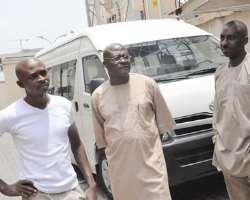 At the resumed hearing of the case on June 3, 2013, Julius Donmo, a member of the Police Mobile force and orderly to Governor Suswan and Aliu Dikko, a senior DSS officer were led in evidence by counsel to EFCC Joseph Uzor. They gave detailed account of how the accused persons attempted to deceive Suswan into believing that they were Operatives of EFCC investigating a non- existent fraud perpetrated by his Commissioner for Finance.

A statement from the EFCC revealed that Donmo, narrated how he was contacted by the first accused person, Mike Gbaa claiming to be a high level officer from EFCC wishing to see the governor to help stop investigation of fraud against his government.

He revealed how after series of calls and text messages, Bulus Ashom Agwom and Nuhu Bawa Atangs were arrested when they came to collect the agreed sum of $3million by operatives of the Department of State Security. The 1st accused was later arrested through his phone.

In his testimony, Dikko identified the accused persons as the suspects arrested and brought to him by his operatives for an alleged crime of personation and fraud.

He disclosed that they were subsequently interrogated asked and made statements under caution.

As the statements were to be tendered, the defence counsel, J.B. Damboi, opposed the admissibility of the documents on the grounds that they were allegedly obtained under duress.

The accused persons are facing a six count charge of impersonation, forgery and criminal conspiracy to obtain the sum of three million US Dollars from Governor Gabriel Suswan of Benue State.

They were alleged to have conspired to falsely present themselves as officers of EFCC who are investigating the accounts of Benue State Local Government and had sought for the sum of three million US Dollars to “kill” the case.

In a bid to actualize the scheme, one of them, Bulus Ashom Agom, who was dismissed from the Nigerian Police Force in June 2012, was alleged to have forged a Nigerian Police warrant of arrest card no 35231 which he presented to the governor.

Thereafter, Governor Suswan alerted the Department of State Security, DSS which arrested and handed them over to the EFCC.

Count one of the six count charge reads: “That you Mark Gbaa, alias Nasiru Nasamu, Ezekiel Ajik Azi, Bulus Ashom Awom and Nuhu Bawa Atangs between January and February 2013, at Makurdi, within the jurisdiction of the High Court of Benue State with intent to defraud, conspired to obtain the sum of three million United States Dollars ($3,000,000) from one Hon. Gabriel Suswan, the Executive Governor of Benue State, when you falsely presented yourselves as officers of Economic and Financial Crimes Commission, who were investigating the Benue State Local Government Account and other pending cases which representation you knew were false and thereby committed an offence contrary to Section 8 (a) of the Advance Fee Fraud Act and other related offences Act no 14 of 2006 and punishable under Section 1 (3) of the same act”.