Source: the President to the National Assembly – in line with Section 145 of the 1999 Constitution. Besides, the euphoria that greeted the historic event are the causalities of the development. 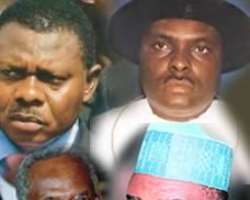 History was made on Tuesday as members of the National Assembly handed Vice President Goodluck Ebele Jonathan the legal muscle to exercise presidential powers.

The Senate declared Jonathan Acting President and Commander-in-Chief of the Armed Forces, pending when ailing President Umaru Yar'Adua returns. Yar'Adua has been in Saudi Arabia since November 23, 2009 for medical treatment. He left without transmitting power to Jonathan - an act that caused a big constitutional crisis.

The move by the law makers followed a spirited push by eminent citizens, including former leaders and serving governors who asked them to spare the nation the embarrassment of being without a leader for over 75 days.

Senate leader, Teslim Folarin, sponsored a motion after a closed session. The Senate claimed the interview granted by President Yar'Adua to the British Broadcasting Corporation (BBC) in where he said he was receiving medical treatment was enough transmission from the President to the National Assembly – in line with Section 145 of the 1999 Constitution.

Besides, the euphoria that greeted the historic event are the causalities of the development.

Top on the list of the causalities of the development is Attorney General and Minister for Justice, Mike Aondoakaa (SAN). Aondoakaa is perhaps the biggest loser of the action of the lawmakers. He has since been shoved to a less fancied position of Special Duties in a minor cabinet reshuffle.

The chief law officer of the federation has always been pushing to get Jonathan to act as President. He once wrote a letter to the former Bayelsa governor asking him to step up since he already has all the powers. He was later to recant after Jonathan rebuffed that advice.

A witty Aondoakaa also curiously refused to raise the issue of the locus of the Abuja lawyer that asked the court to compel Jonathan to start acting as President.

Jonathan refused to obey the court order to the chagrin of the Attorney General and those that want ailing President Umaru Yar'Adua to be kept off the national radar.

Minister of Agriculture & Water Resources, Dr. Sayyad Abba Ruma is another looser in the new arrangement.

He is a prominent member of the President's kitchen cabinet. Abba Ruma who is a onetime secretary to Katsina state government under Yar'Adua is one of those firmly against attempts to get Jonathan to act as President.

It was even reported that the minister once allegedly sold a dummy to members of the Federal Executive Council that Yar'Adua would be speaking with them via teleconferencing. Although the President never did, he however succeeded in thwarting a discussion on the president's health. His job might actually be on the line.

Former Delta governor, James Ibori is another looser in the emerging power game. Ibori is known to be very close to Yar'Adua and was said to have even nominated a Principal Private Secretary to the ailing leader.

Ibori who is touted to be eyeing the Vice Presidency in 2011 with Yar'Adua was said to have bonded with those against a Jonathan Presidency. Those close to the vortex of power foresee a situation where the new man at Aso Rock might nail Ibori and his ambition.

Incumbent Bayelsa governor, Timipre Sylva is another person that is in for a rough time under the new arrangement. Sylva, who succeeded Jonathan as Bayelsa governor wanted to control the party structure and had used under hand tactics to achieve his aim. In the process, he stepped on several steps including that of the Vice President.

In the battle to make Jonathan president, he was said to be with the group bent on scuttling the promotion.

The Bayelsa governor is said to be behind several unsavory reports against Jonathan.

Secretary to the Government of the Federation, Yayale Ahmed is another loser in this power game. Although he did not manifestly show his hands as one of those against Jonathan, his decision to gather the memo submitted by Information minister, Dora Akuyili, asking that Yar'Adua should hand over to Jonathan sold him out.

Minister of Petroleum, Rilwanu Lukman is another casuality in the emerging power equation. The septuagenarian minister is one man that does not believe in the Presidency of Jonathan and he demonstrated that during the yuletide when he elected to travel out of the country against the order of the Vice President that all the ministers whose portfolio is linked with petrol should not leave Abuja but should hang around to solve the embarrassment that the fuel situation is becoming for the government.

But Lukman did not only leave Abuja, he traveled out of the country only to explain later that Yar'Adua has approved his vacation before he traveled out for medical treatment.

Minister of Finance, Dr Muktar Mansur is another member of Yar'Adua's kitchen cabinet. Mansur is said to be an unrepentant loyalist of the ailing President. Mansur is reported to be one of those behind the scene plotting how the President could cling to his seat and frustrate the emergence of Jonathan.

Yar'Adua's Special Adviser on National Assembly, Sen. Mohammed Abba-Aji is one man whose job is surely on the line. Abba-Aji from Borno state has a lot of explanation to make on what happened to the supposed letter sent to the senate by the ailing President.

Yayale Ahmed claimed during an encounter with the Senate that he authored a letter, which was vetted by Aondoakaa and signed by the sick President, but the letter never got to the Senate.

National Chairman of the Peoples Democratic Party (PDP), Vincent Ogbulafor is a sure looser of the present development. He prevaricated on the stand of the PDP on the power vacuum and when it became apparent that Yar'Adua would soon lose his seat, he raced to the Senate to allow the ailing leader two weeks within which to get his letter to the NASS.

Apart from the fact that Jonathan knew that he is not on his side in this matter, Ogbulafor is sure to lose his seat soon as some hawks in the north would soon be asking that the party revisit the power sharing equation.

Speaker of the House of Representatives, Dimeji Bankole is another sure looser in the emerging power game. The lower house, which he heads, is known to be very reluctant when the nation expects them to be up and doing.

The six-member committee that was raised to visit Yar'Adua in Saudi Arabia is more of a time wasting device than anything as it took the committee two weeks before it can even apply for visa to visit Saudi Arabia.

Political pundits claim Bankole's willingness to play the Northern game is as a result of the manner he emerged as the Speaker. However, in the coming days, the seat might come under threat as some power hungry hawks in the North might ask that the seat revert to the north since the south is now in possession of the Presidency.

Senate President, David Mark is like Bankole. The only difference is that he retraced his steps and decided to flow along with the tide of public opinion at the last minute. The upper chamber spoke tongue-in-cheek for a long while until eminent Nigerians paid visits to the NASS asking that the proper thing be done and safe the nation the embarrassment occasioned by the vacuum.