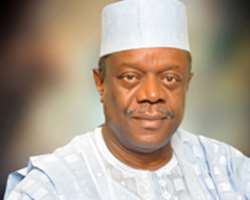 Nkanga specifically singled out chieftains of the Northern Elders Forum (NEF) and Arewa Consultative Forum (ACF) such as Alhaji Lawal Kaita, Prof. Ango Abdullahi and others for their attack on the Jonathan administration over the emergency rule issue.

In a statement issued in Uyo, the Akwa Ibom State capital, weekend, Nkanga described Nigeria as a complex nation where nobody has the monopoly of wisdom to lead or govern.

Maintaining that the Northern leaders were only fanning the members of ethnicity by their condemnation of the Presidential declaration, the former governor said all Nigerians are equal stakeholders in the nation building process and there is no second class citizen in the country.

He also described as “Enemies of Nigeria people” those who are opposed to the declaration of state of emergency by the president without any viable alternatives.

“Discerning Nigerians are persuaded by the vituperations of some of these people and groups, especially the Northern Elders Forum (NEF) and Arewa Consultative Forum (ACF) to believe that there is indeed a grand design to make Nigeria ungovernable for President Jonathan,” he said.

Nkanga added that “Whereas several public commentators and leaders across the country have applauded President Jonathan for the courage to take this action in the face of atrocious and criminal killing by Boko Haram and other sects in the country, people like Alhaji Lawal Kaita and Prof. Ango Abdulahi have continued to fan embers of ethnicity and very myopic political ambitions to condemn and even threaten the audacity of Mr. President to do so.”


He maintained that those condemning the Jonathan administration are only being driven by inordinate ambition for power rather than the interest of the generality of the people.

“Every discerning Nigerian is in agreement that the very foundation of our unity as a people and sovereignty as a country that rest on the crest of our secularity has been threatened by the notorious activities of criminal and terrorist organisations like the faceless Boko Haram group.

“It is extremely sad that those who should join ranks with the president to proffer solution to the ceaselessly insensitive killings, maiming and destruction of lives and property in universities, church and bus stations are busy attacking and condemning the president for the atrocious activities of their brethren,” the former military administrator said in the statement.

He said it was President Jonathan's desire for peace in the country that made him to hearken to the demand of the Northern leaders to grant amnesty to Boko Haram to the chagrin of other Nigerians, especially after the terror unleashed by the group on innocent citizens.

Nkanga lamented that despite this, Lawal Kaita and Ango Abdullahi still find comfort in vilifying the president just to satisfy their insatiable lust for power.