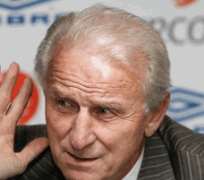 http://www.nigerianbestforum.com/blog/wp-content/uploads/2010/02/Trappatoni2.gif Despite the assurances from his assistant that Ireland manager, Giovanni Trapattoni, will not take up the vacant Super Eagles job, his advisor has declared that Italian tactician would be interested in coaching Nigeria after turning down offer to handle the Les Elephants of Cote d'Ivoire.

Speaking through Domenico Ricci, his advisor, the veteran Italian disclosed that he although he was approached by the Elephants a week ago to lead the side at June's World Cup, he would be interested in handling the Super Eagles on a longer contract.

'He refused an offer from Ivory Coast a week ago because they offered him only the World Cup,' Ricci told BBC Sport.

'But I think he is more interested in Nigeria than Ivory Coast. He is not tired yet. He has a very young mentality, so he wants to do something and he's not just interested in the World Cup.'

Nigeria is on the hunt for a coach to lead them at the 2010 World Cup finals after firing coach Shaibu Amodu a week ago.

The 70-year-old Italian is one of the coaches on the Nigerian Football Federation's list of preferred candidates.

Trappatoni is currently in charge of the Republic of Ireland and is contracted to lead them through to the end of the Euro 2012 qualifiers.

Earlier this week, a Football Association of Ireland official expressed 'confidence' that Trapattoni would stay in the Irish job.

Trapattoni's name is believed to be on a list of six other coaches being targeted by Nigeria.

The NFF has pledged to reach a decision by the end of February.

Trapattoni's Republic drew 1-1 with Nigeria in a friendly match at Fulham's Craven Cottage ground in May 2009.

They missed out on World Cup qualification after a controversial play-off against France in which Thierry Henry's handball allowed his team to level on the night and progress on aggregate.

Trapattoni is also a former coach of the Italian national team, and has enjoyed huge success at club level at Juventus, Inter Milan, Bayern Munich and Benfica.