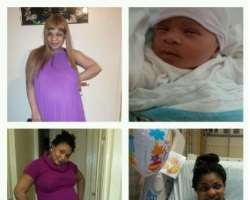 The news of Laide Bakare's child delivery on Friday caught many by surprise. It was a news many of her fans were not expecting at the time it came. The reason for that was because only few weeks ago, precisely in early May 2013, the actress announced, through her publicist, that her marriage to US-based Olumide Okunfulire was over.

It was then reported that she has travelled to the US with her new husband, Tunde Oriowo, for their honeymoon.

But within the same month of her marriage crash announcement, the news of her child birth came.

Some fans spoken to by Nollywoodgists.com expressed dismay at the development. Most of them concluded that Laide must have been seeing her new husband close to a year now. Some other fans expressed less concern on the issue. They said it is her life and that she's old enough to take responsibility for her actions.

However, they all wished her well in her new marriage.

Her last marriage produced a child. She is expected to return to Nigeria in few weeks time.