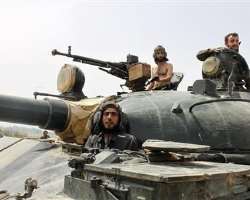 Syrian troops and Hezbollah guerrillas besieging the border town of Qusair fought with rebels on Saturday as the United Nations warned all sides they would be held accountable for the suffering of trapped civilians.

The Britain-based Syrian Observatory for Human Rights said fighting was taking place inside Qusair and in villages around it, largely controlled by President Bashar al-Assad's forces who have cut off access to the town.

Rebels have pleaded for military help and medical aid for the hundreds of people wounded in the onslaught by government forces, who are also fighting back fiercely around the capital Damascus and the south and center of the country.

The battle for Qusair is happening as the United States and Russia seek to overcome deep differences over Syria and bring the two sides to the negotiating table for a political solution to the civil war in which 80,000 people have been killed.

United Nations Secretary-General Ban Ki-moon was monitoring the battle for Qusair "with the gravest concern" and called on both sides to allow civilians to escape the town, usually home to 30,000 people.

"The eyes of the world are upon them, and ... they will be held accountable for any acts of atrocity carried out against the civilian population of Qusair," a U.N. statement said.

U.N. emergency relief coordinator Valerie Amos and High Commissioner for Human Rights Navi Pillay said they were alarmed that thousands of civilians may be trapped in Qusair.

"We understand there may also be as many as 1,500 wounded people in urgent need of immediate evacuation for emergency medical treatment, and that the general situation in Qusair is desperate," they said in a joint statement.

The Observatory, an anti-Assad network that monitors the violence in Syria through medical and security sources on the ground, said at least one person was killed during fighting inside Qusair and that Assad's troops were being reinforced ahead of a possible assault on the remaining rebel-held areas.

Rebels also tried to attack the nearby Daba military air base, seized by the army on Wednesday, and fought Assad's troops around Daba village, it said.

The two-week battle for Qusair is aimed at securing supply routes near the Syrian-Lebanese frontier, which both sides accuse the other of using to bolster their forces inside Syria.

For Assad, seizing Qusair would also allow him to cement control of a belt of territory between the capital Damascus and his stronghold on the Mediterranean coast.

The prominent role of guerrillas from Lebanon's Shi'ite group Hezbollah has angered rebels, who have threatened to take the battle into Lebanon unless Hezbollah withdraws.

Most of the rockets landed in empty fields. No one was hurt but some buildings were hit by shrapnel.

It was the first time the area, about 60 km (35 miles) east of Beirut, had been struck by rockets.

Several barrages have fallen in the northern Bekaa Valley and on Sunday two rockets were fired at the Hezbollah stronghold of southern Beirut after Hezbollah leader Hassan Nasrallah vowed his fighters would battle in Syria to victory whatever the cost.