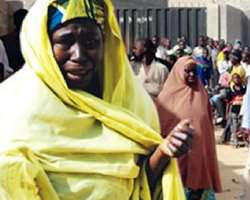 SAN FRANCISCO, May 31, (THEWILL) – In line with President Goodluck Jonathan’s directive for the release of women and children detained in connection with the Boko Haram insurgency, 58 suspects have been freed and handed over to the Borno and Yobe State Governments by the Joint Task Force (JTF), in the first phase of the exercise.

Six women and 14 boys (aged between nine and 14 years), accused of spying for the insurgents, were released on Friday by JTF, Operation Restore Order, in Maiduguri, the Borno State capital.

The freed suspects were subsequently handed over to the State governor, Alhaji Kashim Shettima, at the Government House Council Chambers, from where they were expected to be handed over to their families for rehabilitation and reintegration.

This came as the JTF in Damaturu, the Yobe State capital, released 17 women and 21 children to Governor Ibrahim Gaidam , who promised to train them to acquire skills that would enable them become useful citizens in the future.

Speaking at the brief ceremony in Maiduguri,, JTF spokesman in Borno, Lt. Col Sagir Musa, who accompanied the the Brigade Commander, 21 Brigade Maiduguri, Brig. Gen. Bamigboye, noted that the suspects were freed to pave way for their rehabilitation and reintegration into the society.

Expressing gratitude for the gesture, the State governor, Shettima, said, "We most sincerely thank Mr. President for his magnanimity. This marks a milestone in our quest for peace and to restore normalcy."

“The Federal Government has shown the commitment by releasing the wives and children of Boko Haram sect members under detention. We would admit the women into our development centres for rehabilitation while the children are going to be handed over to the Ministry of Women Affairs and advertise for their parents to come and receive them after they might have written an undertaking to enroll them in schools,” Shettima said.

The governor also promised to train the women at the various vocational training centres in the state to acquire skills that would enable them earn a decent living.

Explaining their modus operandi while working for the Boko Haram, some of the boys confessed that "We watch out for the soldiers at their unit and report back to our bosses; we were reporting when soldiers are at ease or enjoying themselves and off guard, we equally report any large money movement to our bosses for their action."

This, according to the boys, provided the needed information for the insurgents to strike and those with large amount of money, especially the traders, were easily robbed.

One of the boys confessed to be involved in razing some schools in Maiduguri, saying "We were given a keg of petrol by our bosses to set some schools ablaze which we did within Maiduguri," stressing that they did such jobs for a fee of N5,000.