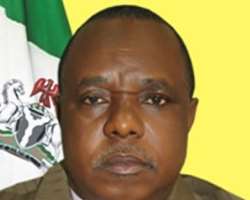 Many years ago during my first year philosophy class, our lecturer told us a story of a certain Ancient Greek philosopher who was seen in the market square in the broad day light with a lighted lantern pacing up and down.

Someone among the bemused crowd summoned courage and sought to know from this philosopher why he was pacing about the market square in the broad day light with lighted lantern.

The philosopher looked at the inquirer and pointedly stated that he was looking for “a man”. The Onlooker then retorted thus; “how come you are looking for a man when the market is swarming with men?”

I think that Ancient Greek scenario applies to contemporary Nigeria whereby it is almost an impossible task for any independent inquirer to find “a man” worthy of that name. It would be difficult if not damn impossible to locate a distinguished patriotic Nigerian (man or woman) who in his/her public and private life will remain consistent in the pursuit of excellence and the achievement of a national goal of genuine greatness, economic prosperity and tranquility devoid of pecuniary gains.

But today, unlike the Ancient Philosopher who could not find a man worthy of that name among his peers, I have found a man of quality who has brought his zeal for selfless service to bear on national life and who is a public servant with excellent idea on how to achieve a set goal. That man is Engineer Elias Mbam, the chairman of the Nigeria's Revenue Mobilization Allocation and Fiscal Commission (RMFAC).

Elias Mbam who once served as minister of state for Finance during the earliest period of return to civil rule is heading this powerful office whose duties are clearly spelt out in the constitution.

Third schedule, part one, article 32 of the constitution of the Federal Republic of Nigeria of 1999 (as amended) provides that the commission (RMFAC) shall have power to - Monitor the accrual to and disbursement of revenue from the Federation Account; review from time to time, the revenue allocation formulae and principles in operation to ensure conformity with changing realities; provided that any revenue formula which has been accepted by an Act of the National Assembly shall remain in force for a period of not less than five years from the date of commencement of the Act; advise the Federal and Governments on fiscal efficiency and methods by which their revenue can be increased; determine the remuneration appropriate for political office holders, including the President, Vice-President, Governors, Deputy Governors, Ministers, Commissioners, Special Advisers, legislators and the holders of the offices mentioned in section 84 and 124 of this constitution; and discharge such other functions as are conferred on the Commission by this Constitution or any Act of the National Assembly.

Few months ago when President Good luck Jonathan appointed him to head this strategic commission, the Ebonyi State born technocrat came on board not only ready and willing to fundamentally and radically discharge the aforementioned constitutional duties alongside his commission and management but he was determined from the inception to transform the institution and to put it on the driving seat of the collective process to significantly improve the revenue generation base of the nation and to ensure equity, social/economic justice and fairness in the enforcement of the revenue sharing formulae so as to bring Nigeria at par with global best practices.

As a team determined to bring about pragmatic transformation, Engineer Mbam started by organizing a major retreat for members of the commission on February 14th 2011 with the underlying objective of sufficiently equipping them with the knowledge and technical capacity to be able to achieve the mandate for which the constitutional body was created.

One of the many well educated resource persons that delivered series of lectures for the commissioners at that inaugural retreat is the current minister of National planning and an economist Dr. Shamsuddeen Usman who praised the hierarchy of the commission for staging such a rich retreat.

The trust, confidence and hope invested on Elias Mbam-led Revenue Mobilization Allocation and Fiscal Commission are beginning to bear fruits that are sustainable and progressive.

The chairman has demonstrated some of the most remarkable leadership qualities which are rare in our clime and it is the hope of most Nigerians that the resolve by this commission to expand the revenue base of Nigeria and ensure global best practices in the re-distribution of Nigeria's wealth to all component parts of the country will be actualized.

Public statements made so far by Engineer Mbam are encouraging. For instance, the chairman of this commission has gradually become a respected voice of honesty, courage and resilience on how best to transparently run Nigeria's financial sector.

He never feared to thread where even Angels dare not venture such as his advocacy for direct funding of the local government which the state governors have converted into their private slush funds.

But Mbam and his forward-looking commission has clearly called for direct funding of local government area councils in Nigeria to make them more viable and better positioned to address the developmental challenges at the grass roots.

Elias Mbam made the call recently at the opening ceremony of a national workshop organised by the Senate Committee on States and Local Government Administration in Abuja.

Mbam said local government administration had been an integral part of the country's governance structure even before independence.

He said, “Consequently, it has often been argued that no meaningful national transformation can take place without a well-managed and functional local government system.

“It has remained, thus far, central in Nigeria's political history from the colonial era through the military regimes to the post-military democracies and under the current dispensation; the existence of local government system in the country is guaranteed by Section 7(1) of the 1999 Constitution of the Federal Republic of Nigeria (as amended).”

The RMAFC boss also observed that certain provisions of the Constitution were hampering the smooth running of local governments in the country.

Mbam stressed that the local government councils were not members of the Federation Account Allocation Committee even though they were beneficiaries because Sections 162 (5) (6) (7) of the 1999 Constitution (as amended) provided for joint allocation with the states.

He said the position of the RMAFC was that local governments should be granted financial autonomy through the payment of statutory allocations from the Federation Account directly to their coffers.

This is exactly what independent analysts have being advocating. A situation whereby state governors corners the resources meant for local government development for other meaningless purposes must be exposed and condemned as reprehensible and despicable.

He also recently advocated the amendment of the Revenue allocation Act of 2004 to check the indiscriminate and illegal deductions from the Special Fund Account Comprising the Development of Natural Resources, Ecology and the stabilization accounts which are being held in trust by the Federal government.

He said such adjustment would offer clear-cut and just criteria for assessing the fund.

Speaking in Abuja, at a National Revenue Summit organised by the Economic Research and Policy Development Initiative, Mbam, who was represented by Director, Planning, Research and Statistics, RMAFC, Mr. Simeon Nwate, also carpeted revenue generating agencies of the government over non-remittance of revenue accruable into the Federation Account.

He explained that the idea behind the setting up of the fund account was to provide financial resources to develop alternative mineral resources as additional source of revenue; intervene and coordinate the general ecological problems and to provide for unseen contingencies and economic downturn in the country.

It is a rare display of courage that the chairman could be seen making such independent -minded statements which are in substantial compliance with the independence granted the commission by the constitution under section 158(1).

However, only recently, the Chairman of the Commission took on the all powerful banking institution in Nigeria and exposed their methods of sabotaging the national economy.

The Revenue Mobilisation Allocation and Fiscal Commission alleged irregularities in the remittances of revenue by some collecting banks.

Mbam said this in Abuja while addressing newsmen on the commission's decision on illegalities being perpetrated by some banks in the remittance of Federal Inland Revenue Services and the Nigeria Customs Services revenues.

Mbam said that most of the banks were engaged by the Federal Inland Revenue Service [FIRS] and Nigerian Customs Service [NCS].

Mbam said some of the irregularities were excessive bank charges like Commission on turnover on revenue accounts of the FIRS and NCS.

He said the commission launched a verification and reconciliation of revenue remittances by the banks to block any leakage to the Federation Account even as he disclosed that 53 consulting firms had been appointed to carry out the exercise covering January 2008 to June 2012.

He said that they were given three months to submit their report.

He said: “The consulting firms will work between June 3, 2013 and August 15, 2013 as approved by the Federal Account Allocation Committee at its March 19 meeting.

“The 1999 Constitution of the Federal Republic of Nigeria empowers the commission to monitor the accruals into and disbursement from the Federation Account.

“It was in this exercise that both the Non-Oil Monitoring Committee and Mobilisation Department of the commission observed some irregularities in the remittances of revenue from some collecting banks.”

Mbam said the aim of the exercise was to recover any excess deduction and stop leakages in future, for transparency and accountability in revenue remittance into the federation account.

Mbam said the exercise was not an attempt to audit the two agencies.

Rather, he said it was to ensure that the collecting banks complied fully with the terms of their agreement with both agencies.

He said: “The commission has requested the Accountant-General of the Federation to open a special account with the CBN into which all recoveries made shall be deposited.

“From this account, the consultants shall be paid their professional fee and the balance be remitted to the federation account for distribution to the three tiers of government.”

This is indeed an uncommon Nigerian hero.