Tortoise Hypothesis: How The Opposition Will Re-Elect Jonathan In 2015 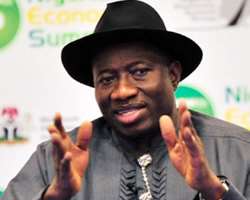 By Bolaji Eletta, PhD
The opposition players and activists in Nigeria are campaigning for GEJ!

If my permutations on the workings of the heart of the average Nigerian is right (I have not been wrong on too many occasions), I can authoritatively declare that Goodluck Jonathan will remain President of the Republic until May 2019. My theory is hinged on what I call the Tortoise hypothesis.

Tortoise Hypothesis?
Tortoise’s only son was caught by his father committing an unspeakable sacrilege and was adequately punished by Tortoise who tied the young tortoise to the tree in front of his compound. When people and passersby saw him on their way to the farm and market in the morning they wondered why such a young man should be so punished. But on being told what atrocity the young man has committed, they agreed that he deserved much stiffer punishment.

It was a sunny day and by late evening when people returned from the market and farms, alas the boy was still tied to the stake! The people then felt the punishment had taken too long. After all, what is it that has not been witnessed under the sun? Tortoise must be a wicked fellow to have subjected such a poor boy to such horrendous punishment! This was the new mindset of the same people who felt that the boy deserved worse punishment earlier in the day.

Now to the opposition and GEJ issue. I am one of those who feel that the President is generally performing below par and could have certainly done better! Then, I have never been President and as such not too familiar with the intricacies of that office. But I honestly feel I would have done more if I were President. However, you will agree with me that not many a president faces the kinds of security challenges our president wakes up to every morning. You will agree with me that Nigerians are a diversified set of people with complexities in traits and character warranting an almost mad man to satisfy her leadership peculiarities.

Thus, the opposition ought to keep the ruling government on its toes at all times. They are to be breathing down the neck of those in government, become whistle blowers but most importantly, present themselves as a better alternative in subsequent election. And as far as I know politically, every nation’s democracy is made robust and deepened by the vibrancy of her opposition.

Presenting and representing the opposition as a better choice in subsequent elections is the primary role of opposition. Sadly, a critical study of Nigerian opposition and activism generally indicates a deep-seated hatred for an individual rather than a sense of patriotism for the nation. The venomous posts on social media space can be nauseating when one measures the bile level in the musings of those who pose as the opposition. It is very important to state clearly here that only a handful of opposition activists set the baseline of their activism on patriotism. Many are soaked in the sweat of hatred that bears semblance to the sweat of Gethsemane. Many of us who would have love to be involved in the fair game of opposition within the confines of the rules of engagement find it very difficult to join league with operators of the opposition industry as the terrain has been polluted by miscreants, disgruntled elements, and “bad belles”.

The handling of items of news with national appeal is another bane of the opposition and the way they react to government policies. When the ruling government releases new policies, I will suggest that a think-tank of opposition parties should go into their closets and study them objectively to see the pros and cons of such policies. They could then come out to dissect the policies by commending the good side and offering an alternative to the not so good side. Just one example here. Only a handful of respected social crusaders agree with the President on the declaration of a state of emergency in some parts of Northern Nigeria. As far as I know, only Femi Falana, Pius Adesanmi, and a few others agreed that it was a right step in the right direction and went ahead to publicly and unequivocally state their support for the President. But many big guns of the opposition openly condemned the move. Yet, every sane Nigerian who has seen and witnessed the maiming and killings in Northern Nigeria will definitely feel the military option is ripe. But not our so-called opposition players who condemned the president's move without even proposing a single reasonable alternative. To them, everything is bad that comes from this administration!

That is not the kind of opposition that breeds a mature democracy and development. If this trend continues into 2014, the opposition can just kiss Aso Rock bye bye because they are merely shooting themselves in the leg. It looks like the only agenda that opposition party has in Nigeria is to vote out PDP. Every utterance, innuendo, statement, communique, campaign slogan, convention statement is focused on the fact that they will kill, maim, destroy, castigate, circumcise PDP (forgive the choice of words).

Many of the chieftains of so and so opposition party still have the rope of PDP on their neck depicting a recent breakaway from the ruling party because of disgruntlement or cross carpeting for electioneering advantage yet they talk with high-handedness and self righteous piousness into high heavens as if they were not part of the major players in the corruption industry just yesterday.

Many in the opposition talk as if they would fabricate or manufacture voters that will vote out the ruling party. I must confess that those in the ruling party are equally guilty of this political arrogance. I call it arrogance as it bears no semblance to any recognition of the sovereignty of the electorate. When a politician comes out to boast that he will deal with any other at the polling booth, such a politician needs some psychiatric evaluation.

Why am I putting up this write up? Have I been paid to do this? NO! But I want a robust democracy for our dear country. I want a vibrant opposition that would keep the ruling party on their toes for performance and overall development of our dear nation. I want excellent choices to be available to the electorate for subsequent elections. Not just gluttonous choices via N200, Ankara wraps, ballot stuffing or snatching nor intimidation or thuggery.

If our opposition continues in their set ways, Nigerians and indeed the electorate will soon begin to feel that Jonathan is being unnecessarily castigated by the opposition and you can guess how they would then lean during the coming election…..towards Tortoise’s son of course!