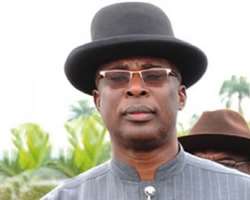 The Federal High Court, Abuja presided over by Adamu Bello on Tuesday adjourned to May 30, ruling on the application by Timipre Sylva, former governor of Bayelsa State, seeking the release of his International passport.

Mr. Sylva in his motion claimed that he wanted his international passport to enable him travel to the United Kingdom to attend to his wife who is to undergo a surgical operation.

The former governor is being tried for allegedly misappropriating Bayelsa funds totaling N6.46 billion when he was governor.

At the hearing, counsel to Mr. Sylva, O.I. Olorondaye, said he had filed a motion seeking the release of the applicant's international passport brought pursuant to section 33, 36 and 41 of the 1999 Constitution. The application was supported with an eleven paragraph affidavit and written address.

Mr. Olurondaye told the court that the former governor has given an undertaking that as soon as he returns from overseas, he will return the passport to the registrar of the court. He further stated that the accused person always come to court regularly.

The EFCC counsel also revealed that there were pending allegations against the accused person and his wife and that the trip was a ploy to escape current investigation and possible trial.

Justice Bello adjourned the case to May 30 for ruling on the passport.