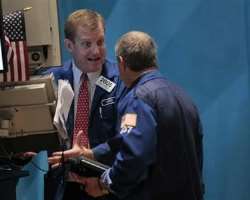 Jobless claims unexpected rose in the latest week while a preliminary read on first-quarter GDP came in slightly under expectations. Though the data indicated an economy that continues to struggle, investors have been worried that strong data would push the Fed to taper its stimulus sooner than had been expected.

"We're still running at a lackluster pace, but the rally continues to be supported by central bank positioning and this data doesn't raise the odds that the Fed will taper anytime soon," said Andrew Wilkinson, chief economic strategist at Miller Tabak & Co in New York.

Initial claims rose by 14,000 to 354,000 in the latest week, confounding expectations that claims would remain unchanged. A reading of first-quarter economic growth showed expansion of 2.4 percent, compared to expectations for growth of 2.5 percent.

S&P 500 futures rose 2.5 points and were above fair value, a formula that evaluates pricing by taking into account interest rates, dividends and time to expiration on the contract. Dow Jones industrial average futures added 37 points and Nasdaq 100 futures rose 1.75 points.

Equities have been closely tethered to central bank policy, with shares tumbling on Wednesday as U.S. Treasury bond yields rose to their highest level in more than a year on concerns the Federal Reserve would curb its bond-buying program. On Tuesday, reassurances from central banks around the world that programs would remain intact had boosted equity prices.

Loose monetary policies by central banks around the world have lifted stock markets, driving both the Dow and the S&P 500 to record highs this year. The S&P 500 is up 15.6 percent from its close at the end of 2012.

Defensive stocks have been among the leaders this year as investors favor high-dividend stocks over fixed-income securities in a low interest rate environment.

Signs that the Fed may begin tapering its stimulus are expected to hit cyclical shares tied to the pace of economic growth, like energy and financials. At the same time, further rises in Treasury yields could weigh on defensive names, such as utilities and healthcare, that often have high dividends.

In company news, Costco Wholesale Corp (COST.O) reported third-quarter earnings that beat expectations by a penny, though sales were below forecasts. Shares rose 0.8 percent to $113.90 in premarket trading.

NV Energy Inc (NVE.N) surged 23 percent to $23.71 before the bell after a unit of Berkshire Hathaway Inc (BRKa.N) agreed to buy the electric utility for $5.6 billion.

EMC Corp (EMC.N) shares rose 5 percent to $24.85 in premarket trading after instituting a quarterly dividend and increasing its stock buyback program to $6 billion from $1 billion.