Shan George Returns To Lagos After Relocating To Calabar 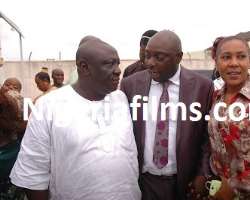 When news went viral in late 2012 that sultry actress, Shan George relocated to Calabar, most of her fans raised eyebrows. It was a surprise to them that their darling screen diva was leaving the Centre of Excellence, as Lagos is fondly called, for her own town.

According to the actress, she was relocated from Lagos because of the hassles of the city.

Shan George recently returned to Lagos few days ago. This time, she didn't come to Lagos to stay or rescind in her decision to leave the city for Calabar. She was in Lagos for an event.

Shan attended a wedding ceremony held in Lagos which also had Chinedu Ikedieze, Segun Arinze and KOK in attendance. It may have been in Shan's mind that she has really missed the hassles of Lagos.

All you need to know about Wizkid's baby mama, Shola [Pictures]

E-X-C-L-U-S-I-V-E: Goodluck Jonathan Will Remain As President As Revealed To Me-Rami Kivisalo Prophesied [MUST READ]

“I have two daughters who are unemployed” – Nasir el-Rufai