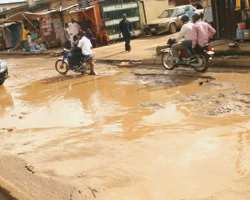 It is now exactly two years left for Governor Babatunde Raji Fashola of Lagos to quit the Round House, that is, the Government House, Alausa. It is worrisome that the people of Isheri-Oshun, a fast growing community of about 400,000 people, bordered by Ijegun, Ikotun and Isolo, is neglected by the same government majority of them voted for. The people are bitter that the government of Action Congress of Nigeria, ACN; an acclaimed progressive political party have not remembered solving the community’s very pressing socio-economic problem since getting to power 14 years ago.

Here, the people lack social amenities, ranging from public schools to library, hospital, market, sports ground and, the very disturbing one now, roads. It is very disappointing that a community of this size is been denied of very valuable infrastructure that assist human existence. The exit and entry points to this community are completely cut off from the rest of the state, it is bad, un-motor able, difficult and terrible. As the rains began, the people’s harrowing experience of departure and arrival to their homes increased tremendously. Between Mondays and Fridays, most people in this community like other Nigerians rush out for their businesses and various schools which are usually located outside their environ. It is the same thing that happens here yet, the horrendous torture the roads make them go through needs government immediate attention.

From the Ikotun end, Iyana-Isheri to Isheri proper, when the rains pour down, nobody, no vehicle meanders through the road due to heavy flood, ably aided by the bad and terrible road condition, lack of drainage system that would be of great assistance in the control of the rampaging flood. The government must move in to save lives, property and not to wait until something unpleasant happens before they declare for a drastic solution. The Isheri-Oshun road, in this 21st century, in Lagos, is an eyesore. It is certainly not something the governor will be proud to exhibit as one of his achievements when he leaves power in 2015.

At the beginning of the year, there were meteorological forecasts of heavy rains this year and, we had expected the government to move into the flood prone areas before now for special attention rather, than play politics with peoples’ lives. The truth is when it rains, the flood is usually heavy and wild thereby, trapping people in their homes and making it extremely difficult for those already out of their homes returning back.

Since moving into this community about five years ago, once the rains come down the people grudge in much pain only for them to also embrace the dry season with grumbling and hissing. No side of the coin is pleasant in Isheri-Oshun as far as the roads are concerned. The dry season brings with it much dust that people breathe in daily. This, the health experts have confessed can lead to serious lung, eye, nostril problems and cause other health hazards. The people are wondering, is it, because they are not the high and mighty in politics, economy, that the government have had to abandon them to their fate?

Again, accessing the road through Isolo, Jakande Estate/Gate, is another painful experience. The road between Jakande Gate and Isheri is a disaster. It is the same coming from Ikotun, nobody, no vehicle can actually access the road when there is a heavy down pour. They either wait for hours to allow the rains subsidize or spend days with friends, colleagues or relations at Oke-Afa, Jakande Estate, because of the difficulty of crossing the flood to their homes. When the government of Gov. Fashola came into power, as one of his campaign promises he began the construction of the road and, many heaved a sigh of relief, poured encomiums on Gov. Fashola for this initiative. But, to the astonishment of people here, two years to the end of his tenure, the road is neither here nor there and, people are wondering when this suffering will end?

The people are asking what they must have done to deserve this treatment from the man they voted into power at his first and second election. Is their live not worthy like their counterparts in other areas of Lagos that, the governor is visiting and developing? Has the governor forgotten his promise to the people of Isheri-Oshun? Do they not deserve dividends of good governance by way of the governor working on these roads? Why are their votes not counting?

In Isheri-Oshun, there is no market, which is a considered amenity for any community. A place is usually designated and built for the people to go and do their buying and selling so as to arrest the unwarranted trading points. Right now several illegal trading points have emerged as a result of lack of unapproved market for the community.

To further deepen the neglect is the lack of public secondary school for the community. Many children who attend public schools in this community go to Ikotun, Isolo, Jakande Gate, for their secondary school education.

Isheri-Oshun also lack a well equipped hospital that can cater for pregnant mothers and very sick patients. In some instances, we have seen students miss writing their examinations, expectant mothers failing to go for anti-natal issues due to blockade of movement occasioned by the terrible road condition. The roads can be fixed by this administration now to lessen the agony the citizens go through. The people are groaning in pain, the bad nature of the roads has brought sorrow, hardship, disease, sickness, financial loss to the people. It would be a big disappointment on this government if the only two roads linking this community are not done before the governor leaves office in 2015.