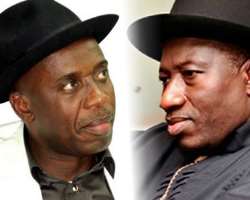 A group, the South East/South South Alliance (SESSA) wants the presidency to be counted out of the political crisis rocking the Rivers State chapter of the Peoples' Democratic Party (PDP).

SESSA said instead the state governor; Rotimi Amaechi should put his house in order as according to the group, what was happening in Rivers State PDP was personality clash among some politicians in the state.

In a release signed by Hon Michael Egbuchulam and Dr (Mrs.) Love Obinna Arugu-Iwori, President and Vice President, respectively, the group said it was wrong to insinuate in some quarters that the presidency was behind the crisis in Rivers State PDP.

The group maintained that from President Goodluck Jonathan's disposition, he would never indulge in any action that would tend to destabilize the PDP of which he is the leader.

The group commended the president for honouring the literary icon, Prof Chinua Achebe by personally attending his burial, stressing that this was an indication of the love he not only has for the Igbos, but for all Nigerians who have distinguished themselves in their fields of endeavours.

Describing Achebe as a great son of Nigeria and Africa who used his literary prowess for the betterment of the  less privileged and the down trodden in the society the release said the president's gesture was in line with his humane disposition, love for fatherland and reward for distinguished service.

SESSA in the release said it supported the state of emergency the president declared on three states in the north, saying the action would checkmate activities of the terrorists and bring back the much needed peace in the country.

It however advised troops involved in the operations in the affected states to abide by their rule of engagement as not to erode the good intentions of government over the state of emergency.

The group further called on members of Boko Haram to come out from their evil ways and embrace peace, stressing that in no way Islam supports killing of fellow human beings.