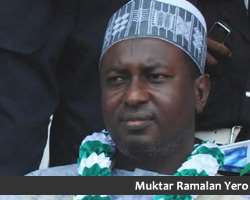 The Director General, Media and Publicity to the Governor, Ahmed Maiyaki, said the exercise was with immediate effect.

According to the statement, former Commissioner of Agriculture, Dr IbrahimRamalan Giwa now takes charge of Science and Technology, GamboLawal from Commerce to Culture and Tourism, Suleiman Ibrahim from Culture and Tourism to Local Government, Timothy Gandu of Economic Planning to Commerce and Industry, while Mohammed Usman retains his seat as Commissioner ofEducation.

Barrister Jonathan Kish Adamu also retains his seat as Commissioner for Justice, while Sani Aminu Mohammed was moved from Lands and Survey to Youth andSports, Magaji Sadiq Hunkuyi from Local Government to Economic Planning, while Arc Isa Idris Umar was moved from Rural and Community Development to Lands and Survey.

In his charge to the Commissioners, Governor Yero urged them to re- dedicate themselves to the service of the people of Kaduna state.