Details of how security agencies unconsciously aided Governor Chubuike Rotimi Amaechi of Rivers State to defeat his Plateau State counterpart, Jonah Jang, in the just concluded Nigeria Governors' Forum election, emerged yesterday. Vanguard learnt that some heads may roll as a result of the blunder.

It was also gathered from a reliable source that security agents were under instruction to jam the venue of the NGF meeting, apparently to prevent the Amaechi camp from using their telephone to woo the Presidency's camp for support. 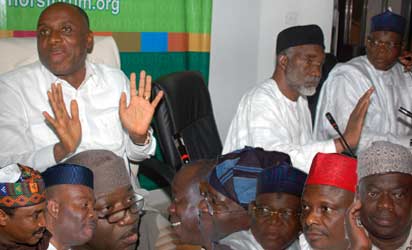 The decision to block all telephone conversation or text messaging before and during the NGF meeting was reportedly reached by top political players in the Presidency, following assurance that the anti-Amaechi camp had got enough governors on its side to defeat Amaechi.

As part of strategies to prevent any member of the Presidency's camp from being lured by the 'opposition', the security agents were instructed to block all communications in and around the Rivers State Governor's Lodge, where the election was held.

It was gathered that without any link with the 19 governors in the Amaechi camp, it would be possible to secure victory for the ant-Amaechi camp.

Meanwhile, a governor from the South South, who participated in the voting process, told Vanguard that communication at the venue was never breached.

Vanguard learnt that acting under instructions, the security agents, who had swooped on the venue as early as 2pm, successfully mobilised high calibre equipment to jam the handsets of all the 35 governors, who had converged there for the NGF election, thereby making it impossible for them to communicate with one another either by voice call or by short messaging service, otherwise known as text message.

How the anti-Amaechi plot backfired

However, while the communication blackout effectively stopped governors from discussing with one another, it also made it impossible for the anti-Amaechi camp, led by Governor Godswill Akpabio to discuss with one another on what was going on at the venue of the election, as agreed before they went for the ballot.

But when it dawned on the anti-Amaechi camp that Amaechi's group was set to return him as the NGF chairman, the blackout already placed on the communication channel by the security agents made it difficult for Akpabio's supporters to brief relevant persons on the situation at the Rivers Governor's Lodge.

'At first, those who did not know what had been done by the security operatives thought that it was a network failure by their GSM providers but the reality soon dawned on them that the security agents had stalled all calls. They, therefore, gave up further attempts to make calls or send text messages.

It was also gathered that even loyalists of the anti-Amaechi camp were confused when they could not make calls after Amaechi was declared the winner of the contest.

'It was so bad that though a South-South governor in the anti-Amaechi camp wanted to call an influential politician at the Presidency and report what was happening at the election venue to him, it was not possible to get the call through,' a governor, who was at the venue of the poll, told Vanguard.

'I am very sure that if the protagonists of the blackout had known that the security move would not also allow them to communicate the progress of the election to their principal, they would not have laid siege to the venue.

'If they had been able to communicate with their sponsors, at least they would have been given orders to stop the vote when it became apparent that Amaechi was coasting home to victory. But that was not to be because even the anti-Amaechi camp could not reach out to anyone.

'But you see in every situation, God has a way of proving some people wrong. Those who thought they could devour the Rivers State Governor were put to shame right at the venue of the election and nothing happened,' another governor sympathetic to Amaechi, said.

A security source said that it was as a result of the jamming of the Rivers Governor's Lodge making it impossible for Amaechi or any member of his team to communicate with anyone that forced the governor to immediately relocate from Abuja to Port Harcourt on Saturday morning.

'Amaechi had to quickly move away from the lodge to Port Harcourt because he was no longer sure of what was going on,' an aide told Vanguard.

Effort to speak with Amaechi on Sunday on why he fled Abuja shortly after the election, failed and none of his aides was willing to speak on the matter.

But a visit to the lodge located off Jose Marti Crescent in Asokoro District, yesterday revealed no activity was going on there. Only a handful of workers were seen at the premises of the massive building.

Efforts to get the reaction of the Department of State Service, DSS, failed as Deputy Director, Public Relations of the service, Mrs Marylin Ogar neither picked her calls nor replied the text message sent to her phone.

I am NGF chairman -Amaechi

Meanwhile, Amaechi declared, yesterday, that he remained the chairman of the Nigeria Governors' Forum as he won the Forum's election which was held last Friday.

Amaechi who spoke at an Interdenominational Church Service at Corpus Christi Cathedral in Port Harcourt to mark this year's children's day celebration which also coincided with his 48th birthday said: 'Let me say to you, I am the Chairman of Nigeria Governors' Forum. That we are not talking is because we have decided not to talk. They voted, we voted and we won. If they had won, I would have congratulated them.'

Fayemi, Ahmed react
Meanwhile, Ekiti State Governor, Dr Kayode Fayemi has described the re-election of Amaechi as NGF chairmn as victory for democracy, just as his Kwara State counterpart, Dr Abdulfatah Ahmed has called for reconciliation in order not to lose sight of the peer review for development which motivated the forum's emergence in the first place.

Governor Fayemi who spoke with journalists at his Ishan-Ekiti country home at the weekend, however urged Nigerians to see the emergence of Amaechi as NGF's Chairman as strictly a demonstration of his colleagues' confidence in his leadership of the Forum.

Kwara State Governor, Dr Abdulfatah Ahmed , while calling for reconciliation in the aftermath of the NGF election,  urged his colleagues to shun divisive political tendencies and bury the hatchet. He urged them to focus on using the NGF as a platform for driving  development for the benefit of the people.

'If there are issues as regards the election of the Forum's chairman, we should use the same platform to resolve them rather than fanning the embers of discord in the media. Our choking security challenges should not be compounded with political conundrum,' the governor emphasised.

According to him, as a peer-review platform for good governance, the NGF should offer critical development advice to first term governor's such as himself so that democracy can be made more meaningful for the people, stressing that deliberate efforts should be made to ensure that the system is not overheated.