By The Citizen
Listen to article

Niger state governors Dr. Babangida Aliyu has carpeted  the senate president David Mark on his call for the  banning of  the Almajiri system saying, the solution to the system is not the banning because  you don't ban a culture without having a replacement.

Speaking when the Senate Committee on Education paid him a courtesy visit in his office in Minna, Monday, the governor said many vital issues like their religion, culture and settlement have to be taken into consideration before thinking of banning the system. 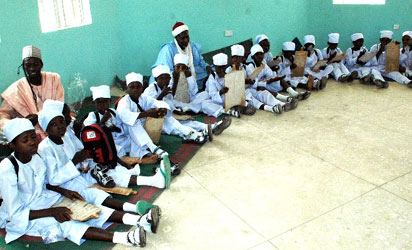 …Cross section of Almajiri students
'It is not just something you just wake up and say ban. It is the same thing like the Normadic schools introduced by the federal government some years ago and because we did not pay attention to their culture and religion, major problems started coming up and this is why the programme is not succeeding,' he noted.

According to him, 'If we can have a way where the federal, state and local governments can come to the aid of these people by absolving them and their teachers into normal school system so that people will not think we want to kill their religion by banning what they consider their culture and that is why we have to think deeply about that.' He also kicked against the building of Almajiri schools pointing out that this  will not solve the problem because it will look  to them as if they are being stigmatized.

'I agree that there is the need to do something about the Almajiri system but I feel that with the way we are doing it now  by just building Almajiri schools, it will not solve the problem. They must be treated as citizens and not to make it look like a stigma and we have to sit down and look at these and it is not the question of banning but a question of what do we do to make sure they are all absorbed into the formal school system,' the governor remarked.

Governor Aliyu also took a swipe at the nation's school curriculum and called for its immediate review.

Chairman senate committee on education senator Uche Chukwumerije has earlier spoken on the need for all tiers of government in the country to pay special attention more on education pointing out that Basic education is the foundation to the transformation of any nation.

He said the committee has been highly impressed from its record about the tremendous monumental growth in the number of schools, number of classrooms and the tremendous steps being taken in the area of manpower in Niger state since 2007,  which he said has led into rendering of quality education in the state.

The committee members were in Niger state as part of their oversight functions to some federal Education establishments in the state.