FORMER Federal Commissioner for Information and elder statesman, Chief Edwin Clark, has called on President Goodluck Jonathan to, as a matter of urgency, declare state of emergency on corruption, saying he must put in place more drastic measures to tackle it.

Speaking, yesterday, during the church service held for him on his 86th birthday at the St. James' Anglican Church, (Anglican Communion), Asokoro, Abuja, the Ijaw leader noted that corruption did not start with the administration of President Jonathan, adding that everyone must be involved in the fight against corruption.

Chief Clark argued that the government of Jonathan had made bold steps to address the problem of corruption by exposing those who were alleged to have stolen the nation's money, especially the fuel subsidy funds.

Tasks elders
He also urged other elders of the country to join hands with the government in building a more united country called Nigeria, even as he told them that they do not have another country.

He said the culture of destroying or pulling down a government, when some ethnic groups are not in power, must stop because  all were equal as Nigerians, irrespective of state or geo-political zone. 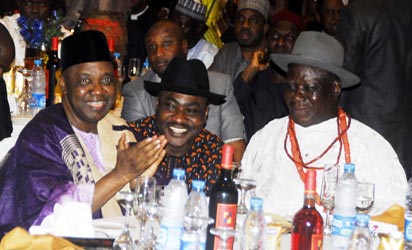 He said: 'I want to appeal to other elders of my age, above my age and below my age to know that we don't have another country to go to. I pray that Nigeria remains a united nation.

'But the problem is that some people want to destroy when they are not in power. We are all equal and we want a united Nigeria where anyone can rise to any position.'

According to him, at 86 he was satisfied and was not looking for anything in life having worked in different places, travelled to different parts of the world, served as a Minister and a Senator, among others.

He urged the young ones to respect elders, adding that he will die a happy man if Nigeria remains a united country.

Sermon
In his sermon, the Archbishop of Lokoja, Most Revd. Emmanuel Egbunu, who preached on the ephemeral nature of life and vanity, extolled the qualities of Chief Clark, who he said always spoke the truth irrespective of who was involved.

Egbunu, who stood in for the Archbishop, Metropolitan and Primate of all Nigeria and Bishop of Abuja Diocese, the Most Revd. Nicholas Okoh, said that each time Chief Clarks talks, it was always newsworthy and urged the celebrant to ensure that he makes same news in heaven.