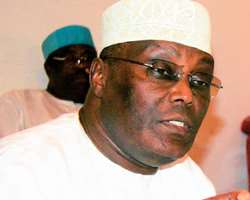 SAN FRANCISCO, May 27, (THEWILL) – Former Vice President, Alhaji Atiku Abubakar, has raised the alarm over what he described as the imminent troubles capable of leading to avoidable implosion and mortal crisis in the Peoples Democratic Party (PDP).

Calling on the elders and founding members of the ruling party to speak up and come together to save the party, Atiku said in a statement issued by his Media Office in Abuja that the worsening polarisation and internal divisions within the party might weaken the party structures at the state and deepen the crisis between the Governors and the President.

Atiku said as one of the founding fathers of the party, he had a duty to call on other founding members to rise to the occasion and caution the forces that are bent on tearing the party apart and providing the ammo for self destruction.

The former vice president lamented the failure of the National Executive Council (NEC) of the party to meet in line with the provisions of the party's constitution and the inability of the Board of Trustees (BoT) to rise to the occasion of arresting what he described as the ugly development.

According to Atiku, the bitter internal divisions within the PDP, has led to crisis in the party leadership in some states, division in the Nigeria Governors’ Forum (NGF) and the suspension of a sitting Governor over disagreements on principle which, according to him, could have been avoided if the founders of the party had added their voices of caution and moderation.

With the challenges of providing good governance and the bid for re-election in 2015, Atiku noted that the PDP could not afford the current acrimony as it is undermining democratic structures at all levels.

He warned that if the crisis was left to get out of hand or not properly managed, the PDP might find itself weaker and politically vulnerable.

Atiku maintained that a house divided against itself could not stand, stressing that silence by concerned PDP stakeholders was a dangerous option at this point when the party faces the challenges of retaining its leadership in 2015.