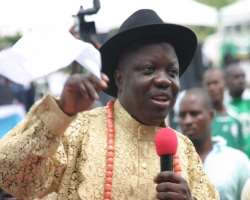 SAN FRANCISCO, May 27, (THEWILL) – The Delta State governor, Dr. Emmanuel Uduaghan, has called on all Nigerians to continue praying for Pesident Goodluck Jonathan over the spate of general insecurity and political turbulence in the country.

Uduaghan, who made the call on Sunday while testifying at an interdenominational church thanksgiving to mark the 2013 Democracy Day and second anniversary of his second term in office at the Flock of Christ Mission, Enerhen, near Warri, also assured that God has not abandoned the country but those who are at the helms of affairs really need all the support and prayers from Nigerians.

"Pray for the President, he needs it,” the governor said , maintaining that the Boko Haram crisis is a major challenge before President Jonathan who really needs all the prayers he can get to win the battle.


" We should pray for the President as he is tackling the Boko Haram issue. He is trying his best. We are all potential victims of Boko Haram and this is why we must support the president to win this war,” Uduaghan said, advising that “When you notice strange people around your environment, please report them to security operative because of the influx of people into the country.,” he added.

The governor also dismissed the rumours making the rounds about his health, saying rumour mongering has eaten deep into the fabric of the society in the state.

He expressed shock that rather than pray for his quick recovery, some persons were already wishing him dead and were even planning to buy casket for his burial.

"As Deltans, let us do away with hatred, we should shun ethnic hatred; hatred will lead us to nowhere but destruction. There is too much hatred for one another in the state and too much rumour mongering.

“I am saying this to correct the wrong impressions. I started hearing rumours that I had stroke, that I was taken away on wheel chair. Some even went about trying to purchase casket that I was dead. Well, they should keep the casket and show my family where they kept it because definitely I will die someday but they will have to wait for a very long time.

“I have conquered the fear of death so death does not scare me. The rumours were too much. When someone is sick you are to pray for him to recover and not to die. There is so much rumour in our state and it is unfair to spread all types of rumour. If people are sick, we should pray for their recovery and not to wish them dead.

“We must stop spreading dangerous rumours; they are destructive rumours, they do not build the society, they destroy society and that is why I am urging all Deltans on the need to live in unity and Deltans should help my administration to finish strong. Pray for us to succeed,” Uduaghan stated.

On the challenges faced before his re-election after he was ousted by the court, Uduaghan said: "Many of us would accept that we really had troubling period in the state during the rerun elections but there were people like Bishop Simeon Okah who were strong spiritually and they backed us with prayers to overcome.

“ I know he suffered a lot of persecution even within the church. I'm aware he lost his congregation because he was supporting me.”


On the spate of kidnapping in the state, the governor said; “We are being proactive in security challenges, especially kidnapping. We are destroying places where kidnappers stay and where they keep their victims.

Uduaghan also commended Deltans for their cooperation on the ban of commercial motorcycle popularly known as Okada by his government, saying “We are not being wicked by banning Okada but trying to create a peaceful state for all and rid the state of criminals.”

Delivering the sermon at the occasion, Founder of Flock of Christ Mission, Bishop Simeon Okah, urged everyone present at the service to embrace God , saying “ we will all give account of our stewardship to the almighty.”

According to Bishop Okah, “Whoever you are, endeavour to make a difference because you are the salt of the world. It is imperative that you have Christ in your life because when we die we will give account of our stewardship before God.”