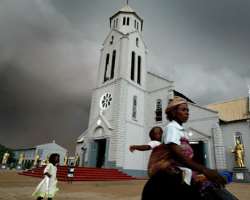 Christian are for social reform, for social institutions have a profound influence upon the formation of individual personalities. A baby is born into a social milieu and forms his personality, by and large, under social influences that he cannot control. In this very aspect lies a popular misconception about Christianity. Many people historically untrained and intellectually unsophisticated think that Christianity is basically against reform and revolution. Their conservatism is misplace, because what we have to conserve is not the present ecclesiastical hierarchy or any social establishment. Every man and every institution – be it religious or secular – is tainted with sin, and naturally both man and his social systems must change to improve themselves. Only self-complacency and pride can stop us from reforming ourselves. In this very fact of insisting on the importance of change lies the truth that Christianity is a revolutionary religion, undoubtedly the most revolutionary of the world’s religions.

What we have to conserve is neither the present church structure nor its set of ritual practices, nor any social system in which the majority of people are Christians. On the contrary, the most important fact that we must conserve is the revolutionary tradition of Christianity which changes man, his family, his community, and ultimately his world. When a man accepts Christ as his Savior, he is turning not halfway from his previous sinful life; he must turn around completely. So must a society. By aiming at realizing the kingdom of God in the social milieu, a society must try to revolutionize itself constantly and perpetually. I believe that in this sense Christianity is not piecemeal reform, but perpetual revolution. Only for this reason, I am a conservative Christian; I am in favor of revolutionary changes in individual life and on a social plane so long as they are being brought forth by Christian means.

Christian beliefs revolutionize man and society in the use of freedom. A Christian, by virtue of having the seed of God’s Kingdom growing in his spirit and liberating him constantly from the grip of sin, learns how truly to exercise his freewill. In his grace, he can be prudent in using his freedom – the very God-given quality that Adam and Eve misused – so as not to be licentious or capricious. To surrender his will to God’s service sounds like a sure way to be enslaved by a divine will, but the opposite is true. A man can become free, expanding the radius of his freedom, only when he surrenders himself to a higher law. This seemingly paradoxical truth is expounded by Arnold Toynbee: “Liberty from a lower law can never be purchased except at the cost of submitting to a higher law; and, when purchased at this cost, it can be preserved only at the price of eternal vigilance; for an empirically experienced hierarchical relationship between these diverse laws current in the Universe, which seems to certify that they are so many enactments of a single divine legislator, creates an agonizing conflict of law of God’s creatures that have accepted His challenge to transfer their allegiance from some lower of His to some higher one”.

Next, Christian beliefs revolutionize man and society so they use reason as it ought to be used. Reason, too, is stained by sin, and therefore fallible. Without the grace of God it loses its power, and as a consequence all too often becomes a tool of evil. In Watergate, the culprits were not uneducated and unreasonable men. We see the inhumane crimes today are committed more by the white-collar workers than by the other groups. A highly rationalistic society without religious beliefs in God is as fragile and fallible as a house built on sand. In contrast, Christians knowing their limitations use their reason more carefully and conscientiously, lest they should become irrational in their efforts to be rational. Although the Kingdom of God can never be realized on earth, the spiritual force of these spiritual men can realize the image of the City of God in their respective societies.

Also, Christian beliefs revolution men and societies and make love a cardinal historical force. From time immemorial, many idealists have expressed the hope of creating a world of love, not of hatred and conflicts, only to find, to their dismay, their good will derided and their earnest efforts wasted. Only the transcendental grace of God coming from above enables us to love others. Only when we receive through faith the radiation of God’s love – the perfect love – in our minds, can we love others. This love from beyond history is revealed to us in Jesus. The ultimate goal of our existence on earth is to realize the world of love as exemplified by Jesus on the cross.

When then is the omega-point of human history? In sharp contrast to social ideologies which tell us that the final destination of history will be the perfection of democracy, communism, socialism or anarchism, Jesus repeatedly and emphatically told us that “the Kingdom of God is at hand”. This passage makes it unequivocally clear that the omega-point of world history is not the perfection of the American model of democracy or the Soviet model of Communism, but the realization of God’s Kingdom. We can keep making genuine historical progress only when we collectively set up our social goal of bringing forth His Kingdom on earth. This may sound very other-worldly, unpragmatic, and impracticable; but I believe that it is a dynamic teaching, both practical and real, for by setting their collective goal on establishing His Kingdom, the early Puritans in America, for instance, laid the foundation of what the United States has become today. However, one caution at this point seems necessary. There is a fallacy prevalent among ultraconservative Christians who tried, quite awkwardly, to identify the Medieval West as the model for God’s Kingdom, considering the two an inseparable unit called Christendom. This is far from being true. God’s kingdom is an eternal ideal, unrealizable and unattainable in historical time, and in this sense, neither the Medieval West nor the United States of the 1950s ever actualized it on earth.

The Kingdom of God, soaring above the time-spatial dimension of human life, must be the unchanging, eternal goal of every society – a goal which constantly spurs human progress. The Kingdom of God presently exists in the minds of true believers, but its perfection lies in the future. It is a perfect ideal society toward which human beings must perpetually move. By setting His Kingdom as our collective goal, we can always strive to reform, remodel, reshape, and regenerate our society, perfecting the shortcomings of sociopolitical ideologies. In brief, the Kingdom of God is a divine milieu in which God’s holy will dominates political institutions, economic systems, cultural traits, norms and the behavioral patterns of people, in addition to man’s innermost life. However the beneficiaries of such a milieu are men, not God, for “all things shall be added unto you” (Matthew 6:33). Let me explain this truth.

First, politically the Kingdom of God is the realm in which His righteousness rules over a people. How unbearable would it be if politics were dominated by man’s trickery rather than God’s justice? Second, economically the Kingdom of God is a milieu in which the people, recognizing God’s sole ownership of all things existing on the earth, will act as His stewards and renders their earthly possessions for the glory of God.

Third, socially the Kingdom of God, although acknowledging the inequality of talents among people, seeks to establish freedom and equality among men and women on the basis of their inalienable rights as the children of God. Fourth, ethically the Kingdom of God is based upon love instead of servitude and bondage.

Therefore, to glorify God actually means to serve men. The Bible says that to give a glass of water to a child can be a tangible way to serve God. Theocentrism in this sense links directly to true humanism. In order to obey God, Christ gave His life for human beings, even to the point of death on the cross.