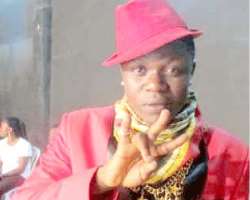 Entertainment runs in their family, little wonder why Arewa Oluwatosin Olanipekun popularly known as Teeblaq went into music. He is the elder brother to the late rap lord, Dagrin.

Teeblaq is a National Diploma holder from Lagos State Polytechnic and has been in the entertainment industry for close to five years now. Shortly after, his brother came into limelight.

Late last year, Teeblaq debuted with Robo song released under the Missofunyin Entertainmentlabel and with a remix which features Olamide and Dammy Krane, he created a buzz with the single getting him a name among his teaming fans as Roboking.

Hopping his game higher, the Robo King has finally released brand new musical audio and video songs titled Getting Money which is currently enjoying massive airplay in the radio stations across the country. Getting Money video is however directed by AK One and he is currently managed by Eldar records.

Teeblaq featured in the biopic movie of his late cousin, Dagrin which was titled Ghetto dreams.